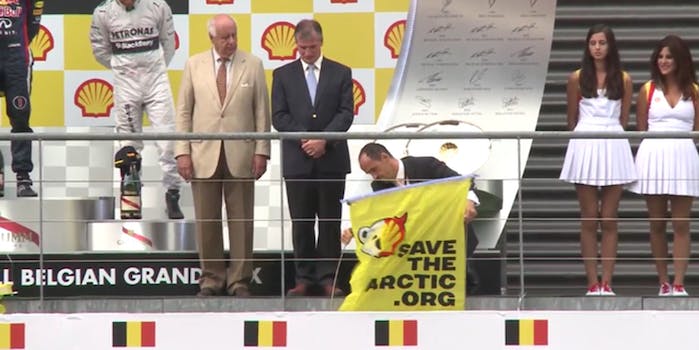 Environmental activist group Greenpeace has long set its sights on the oil slicks at Shell. Last summer, they constructed an elaborate online hoax. Yesterday, they protested Shell’s Belgian Grand Prix event, as part of Greenpeace’s “Save the Arctic” campaign. Half a dozen activists snuck in a banner before the race started, then two more managed to unfurl smaller remote-controlled banners during the awards-ceremony portion of the race. You can almost hear “Yakety Sax” playing as event organizers scramble to take them down.

On the Greenpeace site, Kumi Naidoo writes about the event, and how he is an F1 fan, but cannot stand for Shell’s tactics:

But while Shell is accelerating into a hairpin turn with faulty brakes, the rest of us are in a different kind of race—the race to protect the Arctic from an oil spill that would devastate this fragile region. Every driver knows that oil on the track spells disaster; an oil spill in the Arctic would be catastrophic.

YouTube commenters were, as ever, opinionated on the matter:

I don’t care about polar bears… Greenpeace are a bunch of worthless pricks. Their only goal in life is to make useless things that won’t﻿ save any polar bear/panda/another species. That’s a lack of respect to those drivers who risk their livings at each race.