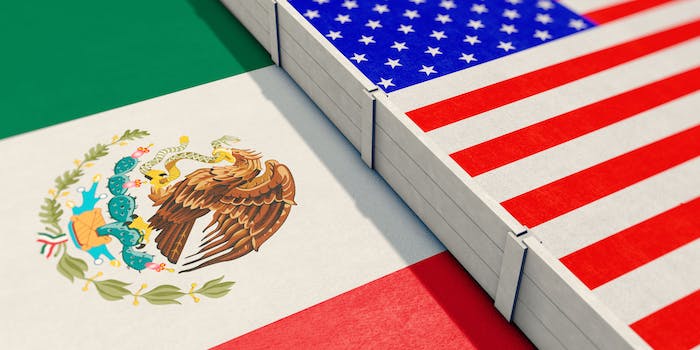 The government is redacting its concerns with the donation, however.

The people behind the We Build the Wall project spent months going back and forth with federal officials about their plan to build a section of a U.S.-Mexico border wall and donate the land and structures to the government.

But one of the most glaring omissions from the hundreds of pages of documents is how the government weighed the ethical considerations of taking over the land and barriers built by We Build the Wall.

Those records show federal officials at the Department of Homeland Security (DHS) and Customs and Border Protection (CBP) worked closely with We Build the Wall to hammer out the details of the historic endeavor.

According to those records, early on in the project, the government created a lengthy list of factors to be satisfied for it to accept donations from We Build the Wall.

The fundraiser launched in response to former President Donald Trump struggling to fulfill his campaign promise to “build the wall” due to political opposition and other factors. We Build the Wall’s wildly successful GoFundMe collected $25 million in private donations, which it then used to erect barriers on private lands near the United States border with Mexico.

The federal government already has a detailed process for accepting donations; that it put this checklist together specifically for We Build the Wall demonstrates its willingness to find a legal means of accepting donations from the group spearheaded by Brian Kolfage, who recently pled guilty to fraud and tax charges associated with siphoning funds from the organization.

It’s not known whether We Build the Wall ultimately donated the lands and structures to the government or if the section of the wall they constructed remains in limbo due to the criminal indictments of four people involved, including Kolfage and former Trump advisor Steve Bannon (who was subsequently pardoned by Trump). American Eagle Brick Company, one of the entities that owns lands where We Build the Wall erected fencing, is permanently closed and its phone number disconnected and website defunct. DHS didn’t respond to an email sent Thursday afternoon.

The document called “Border Wall Donation Acceptance Checklists” includes factors ranging from the environment, design, engineering, and more. Some of it is straightforward, such as doing a title search and securing relevant permits. The checklist states that it requires compliance with various federal laws, including the National Environmental Policy Act (NEPA), the National Historic Preservation Act, the Endangered Species Act, and the Clean Water Act. Just some of the requirements for compliance with NEPA include consulting federal, state, and local agencies, as well as the public; conducting environmental surveys; publishing its draft environmental plan; and consulting the State Historic Preservation Officer and Native American Tribes its project could impact.

Portions of the checklist addressing the design and engineering requirements are redacted, potentially due to the understandable security concerns associated with people having access to the design schematics of barriers at the United States’ border with Mexico.

For reasons unknown, the section about legal and ethical considerations is completely redacted. It spans an entire page and includes nine bullet points.

Controversy surrounded Trump’s border wall from the beginning of his campaign. The prospective wall attracted intense support from people with hardline views on immigration and similarly passionate resistance from people on the opposite end of the political spectrum. Although the U.S. has maintained and expanded on barriers in the border region for many years and under presidents from both parties, many opponents of Trump’s wall viewed it as racist, inhumane, and unnecessary, as the majority of undocumented immigrants enter the country legally.

Further, potentially murky ethics are involved with allowing a private group to construct what would ultimately become part of the federal border wall. Private entities aren’t accountable to the public who would essentially become stewards of the property and structures upon it. In the event of deficient construction causing injuries, death, and/or damage to private property, the public could be on the hook for the costs if such occurred after a transfer of ownership.

There is precedent for such issues. In 2020, the Texas Tribune reported that a separate privately built section of border wall in Texas was at risk of falling into the Rio Grande River. The builder dismissed the warnings of the engineers and hydrologists the outlet consulted.

The checklist the government provided to We Build the Wall is referenced in an August 2019 email summarizing a meeting between CBP officials and representatives from the group. The email sent to a slew of high-ranking CBP and Border Patrol officials notes that they’d discussed a portion of wall the group had completed in New Mexico and provided it with the checklist about the requirements for CBP to accept future donations.

“WBTW representatives asked for clarification on what a donation offer would need to look like and whether CBP would be amenable to acceptance if an offer were made,” the email states. “[CBP] Deputy Commissioner [Robert] Perez expressed that CBP is interested in exploring all available options if an offer were made.”

The group also reportedly discussed the GoFundMe and We Build the Wall’s intentions to potentially build barriers in three additional areas, the names of which are redacted.

The email ends by noting that their meeting “concluded on a positive note” and says CBP planned to follow up with We Build the Wall in two-three weeks.

A donation form is also included in the documents obtained by the Daily Dot. The form lists We Build the Wall as the donor and states that its “gift will aid and facilitate the Department [of Homeland Security’s] mission” by “[closing] off one of the most heavily trafficked human- and drug-smuggling corridors in the El Paso Sector, improving border security.”

While it now may prefer to distance itself from the project, the government’s documents show that it willingly participated in the endeavor and appreciated its results. Another of its documents includes a glowing review about the roughly half-mile section of border barrier We Build the Wall constructed in New Mexico.

“In summary, and in the short amount of time since its construction, the barrier has and continues to have a positive operational impact on the border area,” it states, adding, “Agents report that it is impeding the entry of illicit activity….”

“The same agents advise that it is redirecting the flow of ‘self-surrender’ illegal migrants toward the Port of Entry; creating a safer border environment for illegal migrants and agents alike.”

The government also conducted a study to show how the privately constructed wall affected traffic across the border. The unredacted portions of the email note some issues, including with a border gate We Build the Wall constructed over International Boundary and Water Commission’s levee access road and American Brick Eagle Company’s concern about its potential liability for injuries to people attempting to climb the wall, as well as how the structure could impact its tax burden.

Overall, however, the June 2019 email to the Border Patrol chief of the Santa Teresa Border Patrol Station in New Mexico praises the wall for rerouting people crossing the border into areas where it’s easier to detain them.

“It is important to note that this was the number one avenue of entry chosen by Brazilians previously because they could enter with their children and numerous rolling suitcases with little effort,” it states.

“That is no longer the case.”

Given the successes that CBP highlights, it may be understandable why it wanted to take ownership of the wall. But the public isn’t allowed to know the considerations against it.