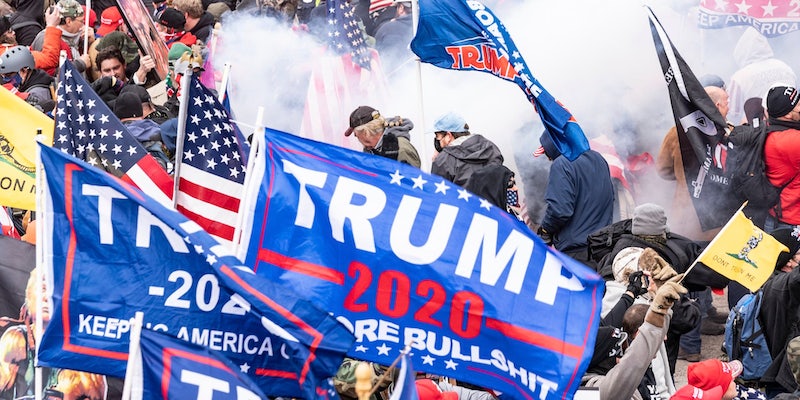 Accused Capitol rioter, militia member believed cops who briefed armed right-wingers before Jan. 6 would keep him out of jail

On Wednesday, federal prosecutors announced the arrests of five members of a former Republican congressional candidate’s militia. The arrests are associated with the Capitol riot.

According to prosecutors, one of the men charged told an acquaintance that he’d never get arrested because of their cozy relationship with the cops. “Flagler county sherrifs [sic] is on our side 80/20. But I’m not ever seeing the inside of a cell brother. Ever,” alleged militia member Brian Preller reportedly wrote last summer.

Last week, the Daily Dot reported that officers from the Flagler County Sheriff’s Office gave a security briefing to members of an armed right-wing group before they went to Washington, D.C. for the protest that became the Capitol riot. None of the members of that group have been arrested.

Flagler County Commissioner Joe Mullins, who organized the group’s trip to the rally on Jan. 6, personally requested the police briefing.

It’s not known whether Preller or other members of his militia, the B Squad, were in the crowd during the briefing.

NBC reports that the B Squad militia was run by Jeremy Liggett, who briefly ran for Congress in Florida. NBC identified Liggett based on social media posts. Liggett didn’t immediately respond to an emailed inquiry from the Daily Dot on Thursday morning.

The B Squad is purportedly an offshoot of the Three Percenters, another self-styled militia.

Federal prosecutors claim that the B Squad formed a little over a month before the Capitol riot.

The complaint states that Liggett was also in Washington, D.C. on Jan. 6, 2021 and coordinated the B Squad’s travel and accommodations. He hasn’t been charged or arrested, however. He wrote on Facebook that the FBI served a search warrant on his home on Wednesday.

Preller was reportedly arrested in Vermont. According to the charging documents, last summer, he told an acquaintance that he was working in a gun shop and building “my 3% army so I can overthrow the federal government.” Preller allegedly said he wanted to connect this army to the Central Intelligence Agency, Department of Homeland Security, and QAnon. It’s not known in what capacity he wanted to form this connection or whether he had any success.

Feds also arrested John Edward Crowley, Jonathan Alan Rockholt, Tyler Quintin Bensch, and Benjamin Cole. It’s not known what the men have pled in their cases, which include felony civil disorder charges against the four including Preller and two misdemeanor charges against Bensch.

Preller and his co-defendants are alleged to have entered the Capitol and been involved in a physical confrontation with law enforcement attempting to stop rioters from breaching the building.

“Specifically, while inside the tunnel, Cole, Preller, Crowley, and Rockholt added their force, momentum, bodies, and efforts to the other rioters in a ‘heave-ho’ effort,” the Justice Department asserts. “This put intense aggregate pressure on the police line in front of the rioters.”

Flagler County Sheriff’s Office briefing people who traveled to the Capitol riot represents one of the most direct connections between police and those who sought to overturn the election in favor of former President Donald Trump. Preller’s claims that he’d never get arrested because the Flagler police were on their side may demonstrate an even closer relationship than previously known.