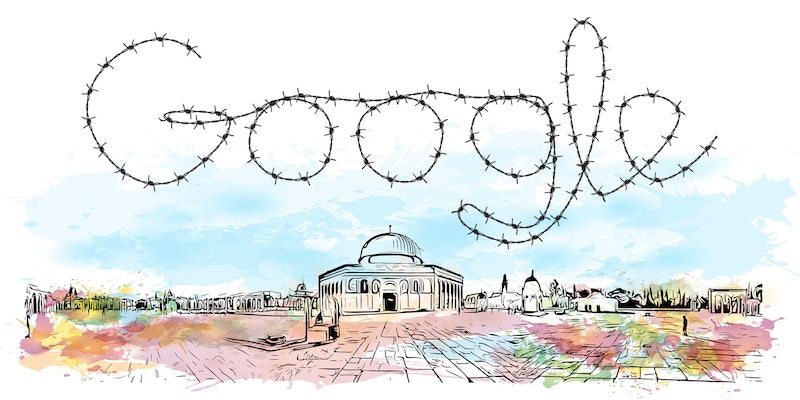 #NoTechForApartheid claims the technology will assist in state violence against Palestinians.

Amazon and Google workers are planning a multi-city protest on Thursday over the companies’ $1.2 billion contract with Israel.

The protest movement, No Tech For Apartheid, asks Amazon Web Services and Google to cancel their contract to provide Israel with cloud computing, artificial intelligence, and other technology on the grounds that it will be used to assist in state violence against the Palestinian people. Under the terms of their contract, known as Project Nimbus, Google and Amazon Web Services are providing the Israeli government and military with cloud computing technology.

“By doing business with Israeli apartheid, Amazon and Google will make it easier for the Israeli government to surveil Palestinians and force them off their land,” No Tech For Apartheid’s website states.

In recent years, Israel has come under increasing pressure over its treatment of the Palestinian people, which many describe as apartheid.

The protest comes on the heels of the resignation of former Google employee Ariel Koren. Koren spent more than a year publicly organizing against Project Nimbus.

Last week, the New York Times reported that Koren resigned from Google over what she described as retaliation against her for speaking out. An internal investigation by Google and a separate inquiry by the National Labor Relations Board reportedly found no wrongdoing on the part of the company.

“Google systematically silences Palestinian, Jewish, Arab, and Muslim voices concerned about Google’s complicity in violations of Palestinian human rights—to the point of formally retaliating against workers and creating an environment of fear,” Koren wrote in a letter regarding her resignation.

Coinciding with her resignation, 15 other Google employees—all but two anonymously—shared audio testimony reiterating Koren’s calls for the company to stop working with Israel over its treatment of Palestinians and what they described as its “anti-Palestinian bias.”

In a statement to the Times, a Google spokesperson insisted that the company prohibits retaliation.

“We thoroughly investigated this employee’s claim, as we do when any concerns are raised,” Google spokesperson Shannon Newberry reportedly added.

According to a press release from advocacy group the Worker Agency, Amazon and Google employees protesting Project Nimbus will be joined by Palestinian and civil society activists as well as community members.

The protest is the latest development in an ongoing effort to pressure the companies to stop working with Israel. Last year, hundreds of employees from both companies anonymously signed a petition urging them to cancel Project Nimbus.

“We cannot look the other way, as the products we build are used to deny Palestinians their basic rights, force Palestinians out of their homes, and attack Palestinians in the Gaza Strip—actions that have prompted war crime investigations by the international criminal court,” they wrote.

No Tech For Apartheid reports that over 1,000 employees of the companies have now signed that petition.

The protests are to take place at Google’s offices in Seattle, New York City, San Francisco, and Durham, North Carolina on Thursday afternoon. Koren is to attend the protest in San Francisco.