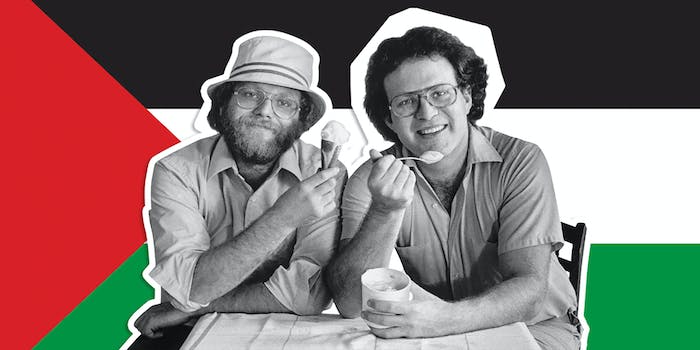 Reactions to the beloved, unabashedly progressive ice cream maker's announcement have been mixed.

On Monday, Ben & Jerry’s announced that it will no longer sell ice cream in Palestinian territories that are illegally occupied by Israel.

“We believe it is inconsistent with our values for Ben & Jerry’s ice cream to be sold in the Occupied Palestinian Territory (OPT),” it said in a statement. The company added that it will not renew its agreement with its licensee, who is based in Israel, but said its products will still be available in Israel under a different arrangement to be announced at a future date.

The decision has earned Ben & Jerry’s praise and criticisms alike.

Ben & Jerry’s, which is now owned by multinational British company Unilever, has a history of taking public positions on contentious issues, such as gay marriage and criminal justice reform. Its pinned tweet is the beginning of a thread about the Capitol riot. “Yesterday was not a protest—it was a riot to uphold white supremacy,” it reads. Sections of its website are dedicated to “issues we care about” and “our progressive values.”

The socially progressive brand has faced calls for a boycott over its silence about the escalating conflict between Israel and Palestine. The company has a factory in Israel, but will now not be sold to Israeli territories that are in Palestine, such as settlements in the West Bank.

Ben & Jerry’s hadn’t tweeted since May, days after the most serious violence in years abruptly reignited the war between Israel and Hamas.

Ben & Jerry’s noted in its statement that it had been pressured to take a stance. “We also hear and recognize the concerns shared with us by our fans and trusted partners,” it said. However, behind-the-scenes the decision appears to have been less straight-forward.

Reactions have been mixed.

“Thank you for not profiting from occupation and Apartheid,” commented author Samar D. Jarrah.

“Following years of #BDS campaigns @benandjerrys has announced it will end sales of its ice cream in Israel’s illegal settlements on stolen Palestinian land. We warmly welcome their decision but call on Ben & Jerry’s to end all operations in apartheid Israel. #BDSsuccess,” it tweeted.

Several wondered why Ben & Jerry’s continues selling its product in other nations with poor human rights records, such as China. Some accused the company of antisemitism.

According to NBC News, the abrupt decision didn’t appear to have Ben & Jerry’s full approval. The board of Ben & Jerry’s which is supposed to have autonomy on social decisions outside of its parent company Unilever, issued a statement decrying the announcement. While they wanted to pull out of OPT for years, the move was made by Unilever.