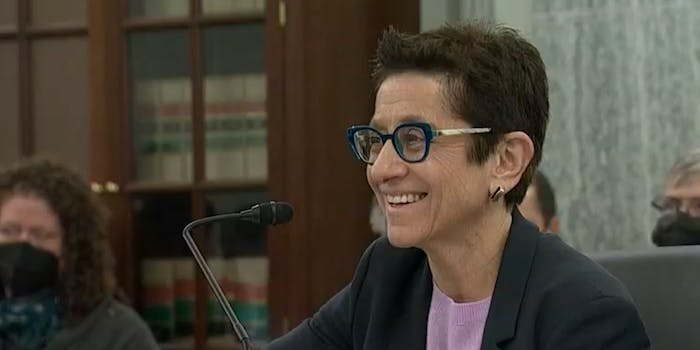 The Senate Commerce Committee announced late Wednesday that Gigi Sohn, President Joe Biden’s pick to be the fifth commissioner at the Federal Communications Commission (FCC), is scheduled to have a vote on her nomination next week.

The committee announced that Sohn and around a dozen other nominees—including Alvaro Bedoya, Biden’s choice to be the fifth Federal Trade Commission (FTC) commissioner—are scheduled to have votes on Feb. 2.

While Sohn, a long-time public interest advocate and net neutrality supporter, has drawn rave reviews from advocacy groups and received a long list of endorsements from organizations, her confirmation process has been bumpy because of Republican objections.

During her confirmation hearing late last year, Republicans on the Senate Commerce Committee questioned Sohn’s “bias” against conservatives, something she vigorously defended herself against. Despite having her hearing late last year, the commerce committee did not vote on her nomination, forcing Biden to re-nominate her earlier this month.

Given the Republican opposition to both Sohn and Bedoya during their confirmation hearings last year, it’s likely the votes will be split 14-14 votes by the Commerce Committee. Under its rules, a tie still sends the confirmation to the full Senate for a vote. Last year, Bedoya was approved by a 14-14 vote last year, but the full Senate never took up his nomination, necessitating the upcoming committee re-vote.

Recently, Sen. Roger Wicker (R-Miss.), the ranking member of the committee who has swatted down numerous attempts to force votes on a net neutrality bill, tried to call for a second confirmation hearing for Sohn. He cited concerns about her involvement with Locast, a streaming service that showed over-the-air programing that was sued by broadcasters and eventually shuttered.

The request by Wicker was slammed as a “cynical” delay tactic by public interest groups.

If she’s voted favorably out of the Senate Commerce Committee, Sohn would face a vote before the full Senate. If she’s confirmed, she would give the FCC a full slate of commissioners for the first time during Biden’s presidency and give Democrats a 3-2 majority.

That majority would allow the FCC to tackle a number of different issues—such as restoring net neutrality rules and the FCC’s authority over the broadband industry—that would almost assuredly require a party-line vote.

Bedoya, Biden’s FTC pick, would also give the FTC a 3-2 Democratic majority.

Evan Greer, the director at digital rights group Fight for the Future, called Sohn and Bedoya “two of the strongest champions for digital justice and human rights ever to be nominated to positions like this” in a tweet on Wednesday night.

“Gigi Sohn is a no-nonsense professional and smart advocate for affordable internet access, rural broadband, net neutrality, and freedom of expression,” Greer tweeted, adding: “Alvaro Bedoya is an expert in privacy, biometric surveillance & algorithmic harm, and exactly who we need at the FTC right now.”

Public interest groups had begun to ramp up the pressure on the Senate Commerce Committee to schedule a vote on Sohn and Bedoya’s nominations.