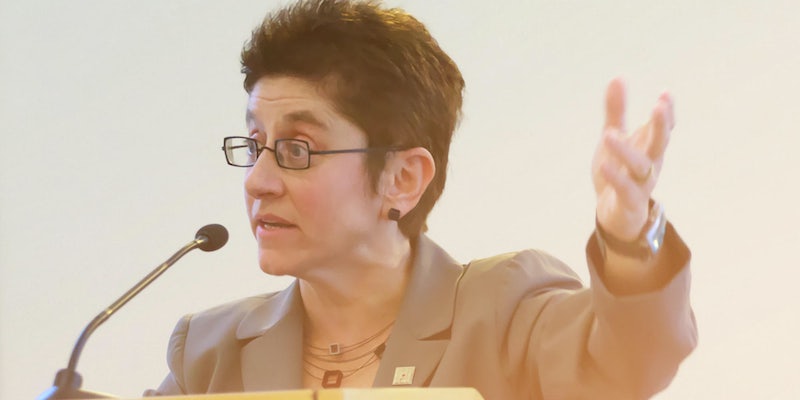 The latest attempt to slow down the confirmation process is being slammed as 'cynical.'

Since then, it has been an open question as to when the Senate Commerce Committee would schedule a vote on her. In the meantime, there have been plenty of attempts from her detractors to try and derail her nomination.

Sohn was nominated in October along with Jessica Rosenworcel, who was confirmed for a new term in December and is the chair of the commission. Biden’s announcement of the picks ended a months-long delay in filling out the agency. The wait got so long it became a real possibility that the FCC could have fallen into a Republican majority. Biden avoided that when he nominated Rosenworcel for another term and Sohn to be its fifth commissioner.

When they were finally announced, the duo of Rosenworcel and Sohn was hailed as a “dream team” for the future of the internet.

Sohn’s confirmation is a key one. If confirmed, she would give the FCC a 3-2 Democratic majority. That majority would allow the FCC to move on a number of agenda items that almost assuredly would require a party-line vote, like bringing back net neutrality and restoring the agency’s authority over the broadband industry under Title II of the Communications Act.

But while Rosenworcel went through a relatively swift confirmation process, Sohn’s nomination has hit many more speed bumps. Despite having a confirmation hearing in December, the Senate Commerce Committee didn’t vote on her nomination before the end of the year. This required Biden to re-nominate her for the position earlier this month.

The reason the committee has yet to hold a vote seems to have come down to timing. Biden’s late announcement gave the Commerce Committee a tight window to hold confirmation hearings before the end of last year. It is possible they chose to move forward with Rosenworcel, who eventually got Republican support for her confirmation, first to avoid the possibility of having the FCC fall into a 2-1 Republican majority at the end of last year.

But stalling on Sohn has left more potential for Republicans to try and sink her nomination. The Senate Commerce Committee has not yet had any markups or hearings in 2022, but public interest groups have ramped up pressure for the Senate committee to schedule a vote, noting that more than 100,000 people have supported Sohn’s nomination to the agency in online petitions and 350,000 people have urged the White House and Senate to fully staff the FCC.

Meanwhile, Republicans have tried to paint her as an extreme partisan—a characterization she vigorously defended herself against during her hearing—with the clear goal of mucking up the confirmation process. While Republicans in Congress have gone after Sohn, she’s received support from numerous right-wing TV networks like Newsmax and OAN.

Much of the Republican opposition during her confirmation hearing centered on tweets she made in the past that were critical of Fox News, questioning her “bias.” Meanwhile, Charles Herring, the president of OAN argued that Sohn had a “strong belief and advocacy for diversity in the programming lineup, especially in news, regardless of conflicts with her personal views,” as Deadline noted.

The latest attempt to derail the process comes from Sen. Roger Wicker (R-Miss.), the ranking member of the Senate Commerce Committee who has blocked numerous attempts to force a vote on net neutrality bills.

Wicker told Politico earlier this week that he wants the committee to hold another confirmation hearing for Sohn because of “ethical concerns” he has regarding Sohn’s previous relationship with Locast, a streaming service that allowed people to watch over-the-air television. The company was sued in 2019 and eventually it shuttered. Wicker obtained a confidential settlement the broadcasters and Locast made, according to the news outlet.

Locast was sued by broadcast networks like ABC, NBC, CBS, and Fox, alleging that it violated copyright law. The company used an exemption in the law that allowed re-transmissions of broadcasts by non-profits. However, last year, a judge ruled that by asking for donations, Locast was violating the exemption. It shuttered shortly afterward and was required to pay $32 million to the networks.

Sohn served on the board of Sports Fans Coalition, a non-profit that ran Locast. She joined after the lawsuit was filed. During her confirmation hearing, she said she felt that the service allowed for low-income and underserved portions of the country to get access to television programs. She also said she did not believe her connection to Locast would impact any of her dealings with local broadcasters or networks—which sued Locast—if confirmed to the FCC.

Sohn’s connections to Locast were brought up by at least three Republicans during her confirmation hearing. Wicker himself joined four other Republicans who asked about Locast in written questions for the record following the hearing.

According to Politico, Sen. Maria Cantwell (D-Wash.), the chair of the committee, had not received an official request from Wicker for another hearing. However, Bloomberg reports that a request was made earlier this week. The news outlet reports that the settlement Wicker obtained made him think there were “troubling questions” about Sohn’s nomination.

But the timing of Wicker’s concern over Sohn’s ethics—a vote on her confirmation has been expected to happen in the next few weeks—has been lambasted by internet rights organizations as “dubious” and a “cynical” ploy to keep the FCC in a 2-2 partisan deadlock, thus stopping it from moving forward on net neutrality.

“There’s been basically stuff put out there that we’re looking at a vote very soon, and then all of a sudden this latest objection, or delay tactic, crops up,” Mark Stanley, the director of operations at Demand Progress, told the Daily Dot. “At the end of the day, we’re approaching February 2022. We’ve gone over a calendar year without having a fully functioning FCC, and I think everybody involved in this has to say ‘enough is enough.’ Enough time has gone by. The Senate has had enough time to consider these nominees … Wicker could have raised this weeks ago, so the fact that he’s just now raising it, I think is really sort of the tell that this really about delay, delay, delay.”

Numerous telecom lobbyists told the Washington Examiner in December that they wanted to block Sohn’s nomination, with one saying that the FCC being “gridlocked and slowed down” would delay regulations like net neutrality being restored.

The last-second attempt by Wicker to try and have another hearing is “just so emblematic of the sort of obstruction strategy that we’ve seen” in Washington D.C., Stanley said, adding that Sohn was “historically one of the most qualified people to be nominated” for the FCC.

As for Biden, besides re-nominating Sohn, he hasn’t addressed the slow movement of her confirmation process or the Republican pushback against her nomination. The Daily Dot reached out to the White House for comment, but did not immediately hear back.

A Senate Commerce Committee spokeswoman told the Daily Dot on Wednesday that a date for a vote on Sohn has not been confirmed yet.