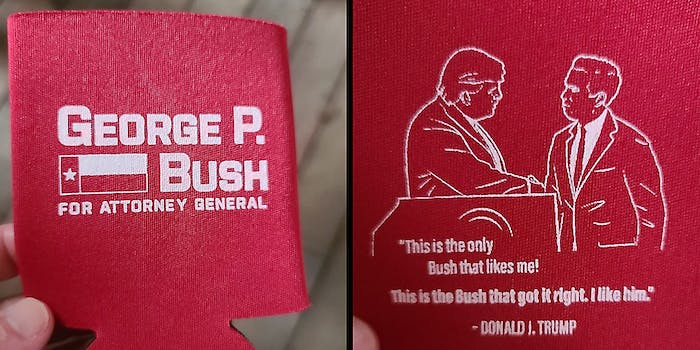 The son of Jeb Bush is running for Texas attorney general.

George P. Bush, son of Jeb Bush and grandson of former President George H. W. Bush, has announced that he intends to run for attorney general in Texas.

Accusing the current Texas Attorney General Ken Paxton of bringing “way too much scandal and too little integrity to this office,” George P. Bush says he plans on running on “honour and integrity.” He’s also hoping for an endorsement from Donald Trump, having already asked the twice-impeached former president for his support.

People reacted to the news on Twitter with memes and jokes about yet another member of the Bush party running for office.

And there was a lot of criticism of George P. Bush seeking Trump’s support—even from Republicans— after Trump was so thoroughly and publicity disrespectful to Bush’s parents and other members of his family.

But this isn’t the first time Bush has gone against his family to side with Trump. During the 2016 and 2020 election cycles, Bush threw his support behind Trump, leading Trump to refer to him as “my Bush” and saying “this is the only Bush that likes me. This is the Bush that got it right. I like him.”

It’s a quote Bush apparently liked so much that he chose to print it on the beer koozies he handed out at a campaigning event on Tuesday.

While for some this symbolises the death throws of the Republican Party, as members tear each other apart over the former president, others say that this is who they’ve been all along.

Despite all this, it remains to be seen which candidate Trump will end up endorsing. The former president backs both candidates during the last election when they weren’t running against each other, and Ken Paxton also has a firm MAGA pedigree. Speaking to CNN last week, Trump said, “I like them both very much. I’ll be making my endorsement and recommendation to the great people of Texas in the not-so-distant future.”