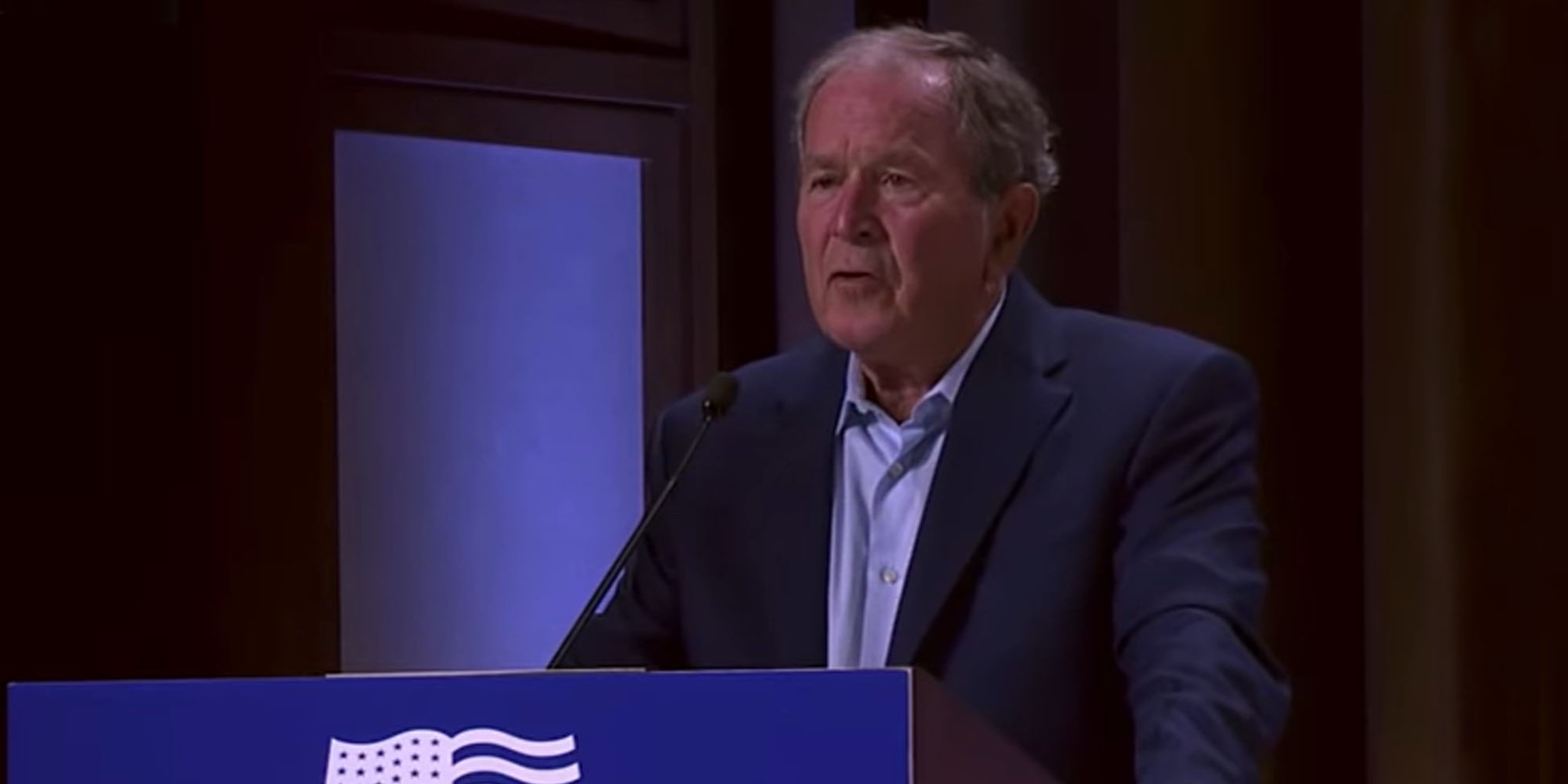 'A wholly unjustified and brutal invasion of Iraq—I mean of Ukraine.'

Former President George W. Bush’s slip of the tongue about his invasion of Iraq has the entire internet talking. In a speech Wednesday in Dallas, Bush said it was “the decision of one man to launch a wholly unjustified and brutal invasion of Iraq.”

“I mean of Ukraine,” he swiftly corrected. He meant to refer to Russia’s invasion of Ukraine.

“Iraq, too, anyway,” he muttered to laughter from the audience.

The invasion of Iraq is widely seen as the gravest blunder of his presidency. The Bush administration preemptively attacked the Middle Eastern nation in 2003 based on faulty beliefs that the country had a hand in the 9/11 terrorist attacks and was harboring weapons of mass destruction.

“Bush lied, people died,” became a common refrain when no such weapons, or WMDs, were found.

The Iraq War and subsequent occupation proved costly, deadly, and prolonged. Upwards of 1 million Iraqis died, including at least 100,000 civilians. Twenty years later, the nation is still experiencing the aftereffects of the war.

In the years since, Bush, then-Vice President Dick Cheney, and other key aides involved in the decision to invade have been called war criminals. Some believe they should be charged in the International Criminal Court.

Bush, 75, blamed his age on the mistake. Many people believe Bush mistakenly saying “Iraq” when he meant “Ukraine” was more accurately described as a “Freudian slip.”

A TikToker called it as possibly “the biggest Freudian slip of all time.”

The clip has reinvigorated criticisms of his presidency.

“For the first time ever, George Bush is right: George Bush did in fact launch a wholly unjustified and brutal invasion of Iraq,” commented @GravelInstitute.

Bush’s speech has united people of all political persuasions.

People ranging from far-right Telegram channels to liberal commentators are calling him a “war criminal.” Preemptively attacking another country, as the United States did when it invaded Iraq, violates the Geneva Convention.

Many are appalled that both Bush and the audience laughed at his mistake.

“The audience & Bush himself chuckling at his Freudian slip is so fucking dark,” commented @borgposting.

The internet being the internet, the incident has also inspired some jokes and memes.

More than one Twitter user added Curb Your Enthusiasm music over the clip.

“Literally everyone I know is quote-tweeting that Bush video,” tweeted @RespectableLaw.

“That shit touched a nerve.”