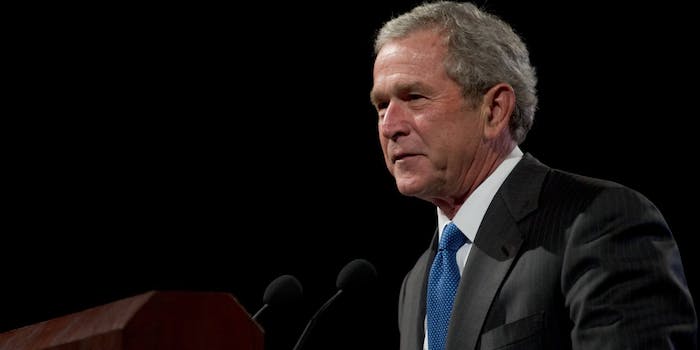 He said via the George W. Bush Presidential Center site that he was “anguished by the brutal suffocation of George Floyd” and called it a “strength when protesters, protected by responsible law enforcement, march for a better future.”

The site seems to have crashed after the former president released his statement. Upon accessing the site, users are now met with a message that reads, “We are experiencing technical difficulties and will be back shortly.”

Floyd died after Derek Chauvin, who was an officer at the time, put his knee on Floyd’s neck for almost nine minutes. Floyd, a Black man, repeatedly told the officer “I can’t breathe” and became unresponsive six minutes in. Floyd was later pronounced dead. Chauvin has since been charged with murder.

“This tragedy—in a long series of similar tragedies—raises a long overdue question: How do we end systemic racism in our society? The only way to see ourselves in a true light is to listen to the voices of so many who are hurting and grieving,” Bush said in his statement.

Floyd’s death sparked worldwide protests against systematic racism and police brutality pervasive in police forces across the country. Police are being accused of only escalating—and in some cases, instigating—violent protests.

Bush has long been criticized for his administration’s response to Hurricane Katrina, which largely affected the Black community. And, in its 2015 “Grading the Presidents on Race,” Politico gave Bush a C- grade.

Bush’s statement comes after former President Barack Obama released one of his own on May 29, saying, “This shouldn’t be ‘normal’ in 2020 America.” The two former presidents’ statements are a stark contrast to how President Donald Trump has handled Floyd’s death and the protests. He has made numerous controversial remarks regarding the protests, including “When the looting starts, the shooting starts” and threatening to deploy “heavily armed” military forces. He has also been criticized for doing little to “unite the nation,” which is often seen as the president’s role.

The Daily Dot has reached out to the George W. Bush Presidential Center.