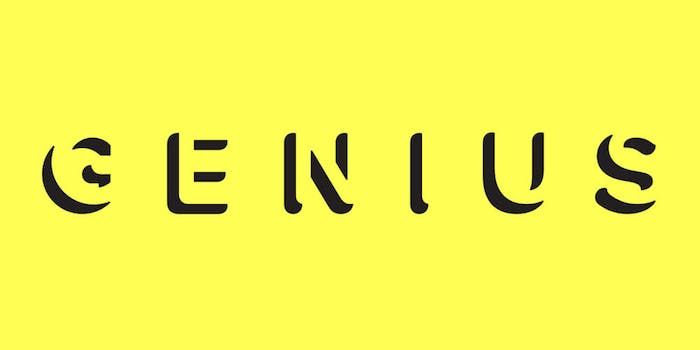 Genius hid Morse code on its website to catch Google.

The lyric website became suspicious in 2016 when a software engineer at Genius found accurate lyrics to the rapper Desiigner’s hit song “Panda” being displayed by Google.

Genius’ chief strategy officer, Ben Gross, told the Wall Street Journal that Desiigner himself gave them the correct lyrics while other outlets failed to properly decipher the song. Google later put the correct lyrics on its site, leading Genius to believe the search giant was scraping its site.

“We noticed that Google’s lyrics matched our lyrics down to the character,” Gross said.

Genius said it contacted Google the following year and again last April seeking answers, alleging that traffic to Genius’ site dropped due to the search engine displaying lyrics directly on the results page.

“Over the last two years, we’ve shown Google irrefutable evidence again and again that they are displaying lyrics copied from Genius,” Gross said.

Genius said it knows Google is scraping its content thanks to Morse code it began hiding inside the lyrics on its site. The company placed curved and straight apostrophes, used to represent the dots and dashes in Morse code, in a specific pattern to spell out a message.

Genius said it found lyrics to more than 100 songs listed on Google, embedded with their secret message.

Google is passing off the possible blame to a third party.

Google told the Journal that the lyrics it shows are provided by the third-party Canadian company LyricFind and not the search engine itself.

“We take data quality and creator rights very seriously and hold our licensing partners accountable to the terms of our agreement,” Google said.

The search giant later added that it is investigating its partners and would terminate any third party “not upholding good practices.”

Darryl Ballantyne, LyricFind’s chief executive, also told the Journal that his company does not rely on Genius for gathering lyrics.