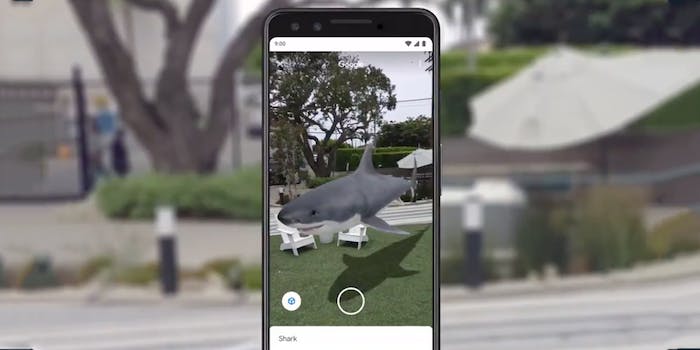 See what that couch looks like in your living room before buying it.

Google announced Tuesday that augmented reality (AR) will soon be integrated into its search engine.

Speaking at its annual I/O developer conference, the tech giant showcased how it can utilize a cellphone camera to create 3D models of a user’s search query.

In one such example, a quick Google search for “great white shark” led to a 3D shark being projected onto the surrounding environment.

While AR has been widely available in apps such as Pokémon Go, Google says it wants to shift the technology’s focus towards everyday usability.

“We are moving from a company that helps you find answers to a company that gets things done,” Google CEO Sundar Pichai said. “Our goal is to build a more helpful Google for everyone.”

AR is expected to be widely used for online shopping, where users can see 3D models of anything from new clothes to furniture.

Numerous companies are already said to be working with Google in order to have 3D models of their products available in Search. CNET reports that those organizations include NASA, New Balance, Samsung, Target, Visible Body, Volvo, and Wayfair.

Users should expect to begin seeing AR items in their search results later this year. But AR will not just be available with Google’s search engine. The company also announced Tuesday that the technology has now been combined with Google Maps.

The new feature allows users to see directions projected onto the real world through their camera.

Google also noted that only those with the company’s Pixel phones will be able to utilize the function for now.

“Pixel 3a and the entire Pixel portfolio will get a preview of AR in Google Maps—the next time you’re getting around town, you can see walking directions overlaid on the world itself, rather than looking at a blue dot on a map,” Google said. “This helps you know precisely where you are, and exactly which way to start walking (in areas covered on Street View where there’s a good data connection and good lighting).”