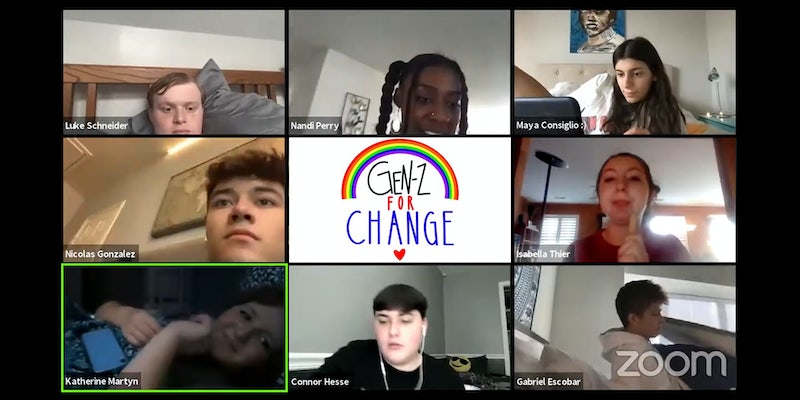 The organization is growing up fast as the midterms approach.

A year ago, the TikTok creators behind @GenZForChange were brought together by a high school junior and a friends-only post. Now, they’re on a Zoom call with the White House.

Just last week, White House Communications Director Kate Bedingfield held a briefing for around 40 Gen Z For Change creators, updating them on the latest iteration of the Build Back Better Act, hoping they’d share the good news with their 1.4 million followers on TikTok.

“It’s really crazy,” says Gen Z For Change founder Aidan Kohn-Murphy, who made the original friends-only post, “TikTok has the effect of throwing the rules of life into oblivion.”

@GenZForChange began as @TikTokforBiden, a coalition of over 400 Gen Z creators—some exclusively political, but not all—who rallied around electing the Democratic candidate in 2020. Since last November, they’ve organized for the Georgia Senate run-offs, partnered with Dr. Anthony Fauci during the COVID-19 vaccine rollout, and worked with Stacey Abram’s FairFight, Climate Power, MTV, and others. Now they’ve taken another step towards growing their influence: organizing as 501c4.

501c4 is the IRS designation for a “social welfare organization.” These entities are non-profits but, unlike their more famous 501c3 counterparts, they can participate in lobbying and political activities. The American Red Cross and the Smithsonian are 501c3s. The NRA and Sierra Club are 501c4s.

As an official nonprofit, Gen Z For Change believes that they’re setting themselves up to be taken seriously as a political force.

“We are not some little TikTok account,” says Elise Joshi, director of operations and a student at University of California-Berkeley. Now, with the official status, groups interested in working with Gen Z For Change “don’t have to worry about our reputation or our values. We are an official organization with credibility,” she added.

Since the official formation in August, the creators have been working to transform what began as an ad hoc operation into an official structure.

“We’ve had meetings to establish code of conduct … establishing a formal complaint system,” says Joshi, in addition to creating a leadership hierarchy, formalizing content teams, and drafting official values for their organization.

For Joshi and others, the emphasis is on keeping enthusiasm up from last year.

During the 2020 campaign, Gen Z For Change provided an alternative media platform for the Biden campaign to engage hard-to-reach young voters. Videos that come naturally to creators can draw in major audiences—on Election Day itself the @GenZforChange account garnered over 20 million views with their content.

But it’s not just views they can provide. Another strategy for @GenZForChange was to organize phone banks, a more traditional campaign method. Except these TikTokers pulled in what they say are especially enthusiastic volunteers from across the nation. For one night of phone banking in the Georgia run-offs, they had 400 people sign up.

“It’s not like taking 400 people off the streets,” say Kohn-Murphy, “It’s people who are really passionate about these issues … and making a ton of calls.” During one phone bank for Biden, Kohn-Murphy recalls 40 volunteers were able to make around 2,000 calls.

Daniel Daks of Palette Media, a management and media agency, and Madeline Twomey of Rufus and Mane, a digital consulting firm, have been advisers to Gen Z For Change through this transition.

“There’s so much white space on TikTok across the board. There’s so many directions to go in,” says Daks. “And we think we’re really sitting at the forefront of what will become a more major industry.”

After the 2016 election, Twomey, says digital organizing became the buzzword of progressive circles. “It was the idea that you can take the organizing models that we know work ‘IRL’ and apply them to online spaces.”

But Daks and Twomey say the political world still gets it wrong, especially with TikTok.

“People still really think of it mostly as ‘I’m going to text people and ask them to volunteer,’” says Twomey. “I don’t think enough people really think about … any space that exists online, you can organize it.”

Looking towards the midterms, the organization is aware they may have the opportunity to seriously back certain candidates, even primary challengers to incumbent Democrats.

“Our group is really really progressive,” says Kohn-Murphy, “And that’s not something that we are in any way scared of or trying to hide … I want us to be advocating for progressive Democrats.”

The group is currently drafting its policy for how it will approach the midterms. They’re crafting how they might officially endorse candidates who desperately want a clout boost with a Gen Z audience, but haven’t settled on an official policy yet.

“I’m still fresh off the disappointment of 2021,” explained Kohn-Murphy, referring to Glenn Younkgin’s win in the Virginia gubernatorial race.

As far as how an avowedly progressive organization will square with becoming more corporate, Kohn-Murphy expressed there will be a need to stay vigilant. He says there will need to be an effort “making sure we’re not too centralized … and that Gen Z For Change as an organization feels accessible.”