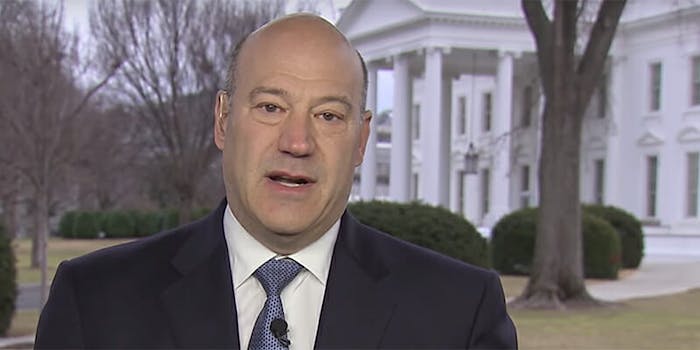 He's the latest Trump adviser to step down.

Rumors that Cohn might leave had followed his opposition to Trump’s recently-announced tariffs on steel and aluminum imports. A former chief operating officer for Goldman Sachs and an advocate for free trade, Cohn had reportedly planned a meeting with White House officials to try to change Trump’s mind about the tariffs.

“It has been an honor to serve my country and enact pro-growth economic policies to benefit the American people, in particular the passage of historic tax reform,” Cohn said in a statement. “I am grateful to the president for giving me this opportunity and wish him and the administration great success in the future.”

Cohn’s departure is the latest in a string of high-profile resignations from the Trump administration. In a statement, the president thanked him for “his dedicated service to the American people.”

“Gary has been my chief economic advisor and did a superb job in driving our agenda, helping to deliver historic tax cuts and reforms and unleashing the American economy once again,” Trump said.

After the passage of the GOP’s tax plan last year, Trump had publicly addressed previous rumors that Cohn considered leaving the White House, according to the Huffington Post.

TRUMP: Gary hopefully will be staying for a long time. pic.twitter.com/eita2zg0GP

News of Cohn’s resignation comes just a week after that of former communications director Hope Hicks, who stepped down after telling lawmakers that sometimes she told “white lies” for the president as part of her job.