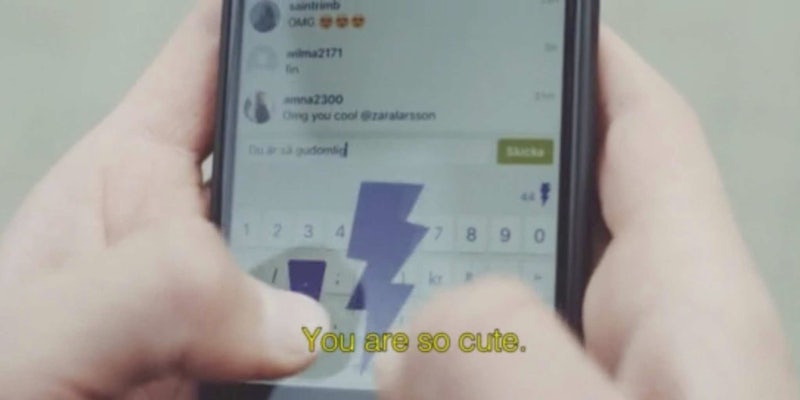 Autocorrecting away the bullies.

A Swedish insurance company has developed an app that aims to curb the rampant amount of bullying that takes place online by replacing hurtful words with compliments.

Fulfiltret, otherwise known as Nasty Filter, is a replacement keyboard app for Android and iOS devices that takes unsavory words and turns them into something more friendly. Swedish insurer Göteborg och Bohuslän released the app as a way to encourage people to think more about what they say before they press send.

The app works like the auto-correct feature on your standard keyboard, except instead of fixing your spelling it fixes your disposition. If you type any of the 1,800 words identified by the app as being bad, a lightning bolt will strike the screen and wipe out the word, replacing it with an option that has a more positive connotation.

The app serves more as a way to raise awareness for the issue of bullying and abusive speech that takes place online than to actually solve the problem outright, but there’s assuredly value to it.

According to a 2013 study by the National Center for Education Statistics, about 72 percent of high school students in the United States reported experiencing cyberbullying during the course of the year. For Sweden, the country of origin for the app, the problem is much less prevalent; a World Health Organization survey found the country to have the lowest rate of bullying in the western world.

Fulfiltret is only available in Sweden for the time being, so if you want to give it a go, you’ll have to brush up on your Swedish swear words first. Or, instead of learning an entirely new language to be terrible in, you can just be a decent person and treat people with kindness. That would probably be easier.