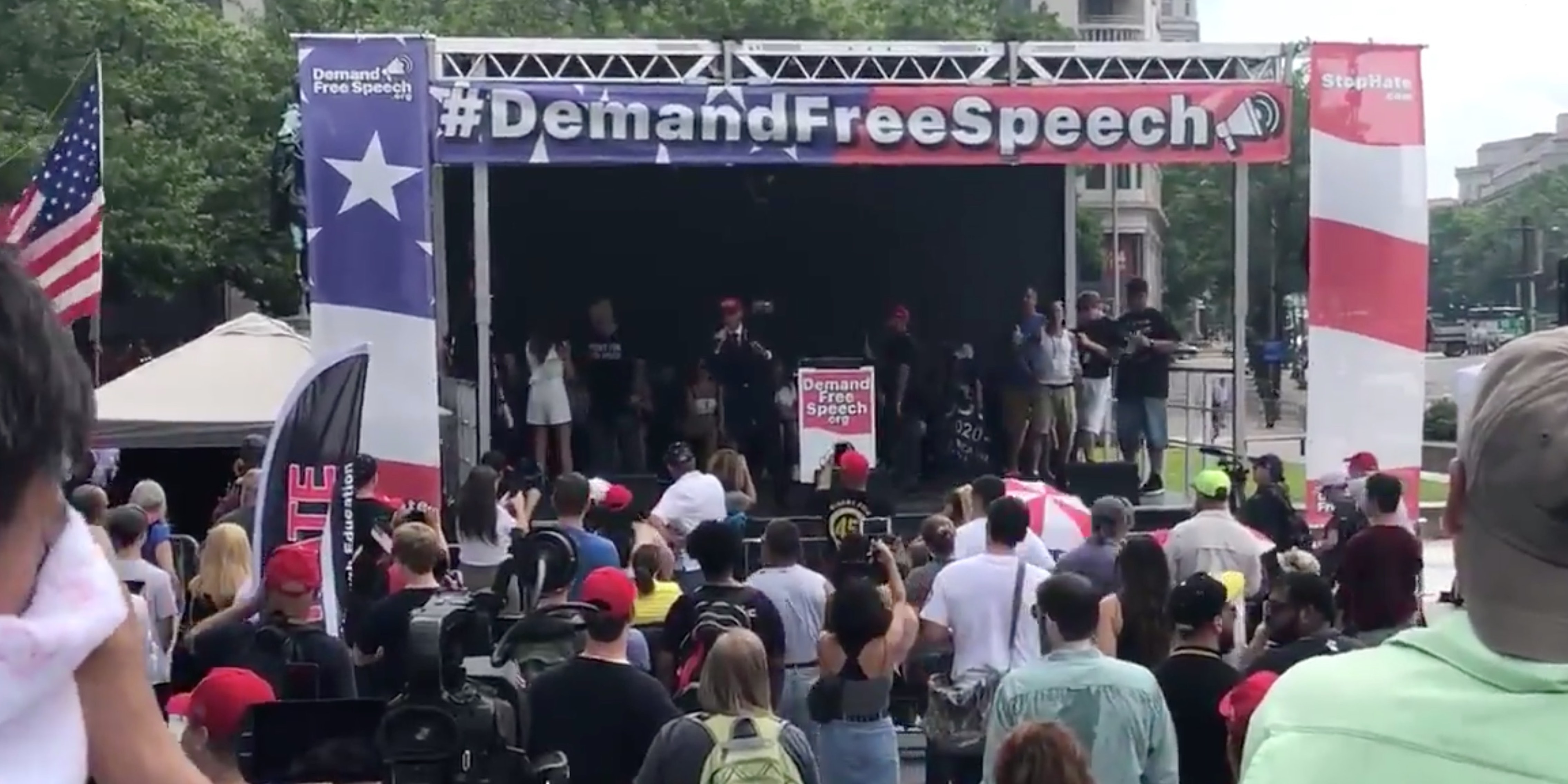 If you aren't free to swipe, are you even free?

Among the more colorful figures on the stage at Saturday’s Demand Free Speech rally in Washington, D.C.—the latest gathering by the Proud Boys—was a blue-suited young man named Greg Aselbekian, who screamed into the microphone “I may have been the first person in history completely banned from Tinder.”

The censored swiper then spun a yarn about being banned for wearing his military uniform in his photo.

Aselbekian boasted that after losing his Tinder over a photo of him and Sen. Ted Cruz (R-Texas), his new profile photo is one featuring him and President Donald Trump, saying “I’m waiting for these woke liberals to freakin’ report it—all that stuff. They don’t know, I wasn’t going to swipe right on them anyway. So I don’t know why they’re bothering.”

His screed also featured a shot at George Soros and “crooked Hillary.”

The Demand Free Speech rally was put on by the “alt-right” group, the Proud Boys, who crowded a concrete square in the capital that is usually crackling with the sounds of skateboarders. The alt-right a collective that often champions white supremacist views.

The all-male gang wore black polo shirts with yellow piping and most of them sported Make America Great Again hats. The organization has splintered over the past year after it was involved in a number of violent clashes that led to founder Gavin McInnes stepping away. But if there were any doubts about their numbers, the Proud Boys dispelled those speculations with a large showing.

The main stage was manned by Joe Biggs, a burly, hoarse-voiced former InfoWars commentator who was booted from Twitter a few days ago. There were some big names on the stage—including Milo Yiannopoulos, Laura Loomer, and Gavin McInnes—and they told mostly identical stories about being banned from social media platforms for exercising free speech, which is their not-unique way of describing hate speech. Of course, they seemed to have other motives for appearing at the rally, McInnes has a new website that he’s pushing while Loomer peddled a newsletter.

Other right-wing figures who were listed as speakers but never appeared include Mike Cernovich and Jacob Wohl. Wohl repeatedly plugged the rally on Instagram in the week preceding it.

Among those who did appear at the rally was the so-called “Blacks for Trump” man who frequents Trump rallies and was even placed directly behind the president in August of 2017. He’s known mostly as Michael and the Washington Post reported that he was charged and acquitted with conspiracy to commit two murders.

He told the Daily Dot that he was about to go onstage after coming up from Miami for the event and that the last Trump rally he attended was one in Orlando.

“I came out here today, I was holding my sign and they said ‘did you want to say something’ and I said ‘yes,’” he told the Daily Dot.

One of the more well-known speakers was Joey Saladino, who goes by Joey Salads. The Staten Islander made a name for himself as a YouTube prankster who once urinated in his own mouth on camera and on another occasion dressed in Nazi garb at a pro-Trump event.

Salads has tried to rebrand himself as a Trump-era conservative with a future in Congress. On Saturday, he took the rally stage wearing a sky blue button-down and a MAGA hat. His speech was tame, mainly stumping for his candidacy for New York’s 11th Congressional district, saying, “If I’m elected to Congress, I’m gonna have Trump’s back probably 100% of the time. He needs somebody like me in there,” adding, “If you wanna help support my campaign, I’m gonna be walking around all over the place.”

Salads declined to tell the Daily Dot how much money his campaign has raised.

He said, “anywhere I go, I run into a supporter.”

Also at the pro-Trump side of the rally were a handful of people with signs claiming that most of your favorite dead celebrities, including Kurt Cobain, Avicii, and Elvis Prestley, were all murdered. The faces of those icons were emblazoned on the signs that the group carried.

The DC right wing rally includes these people who claim Prince — and a lot of other celebrities who died tragically — were actually murdered. They claim they have “psychic evidence.” pic.twitter.com/EOsJmOppQZ

That group, which runs a website titled Justice4Prince.com, claims that Prince was actually murdered. They are led by a woman named Abigail Noel, who told the Daily Dot that she’s a psychic. She said: “When somebody on the other side who’s dead comes to me and tells me they were murdered, I work the case.” From there, things got even stranger, she explained, “the soul presence of Prince Rodgers Nelson came to me less than 48 hours after he died and revealed details about his murder and how he was murdered.”

Asked why she appeared at a Proud Boys rally, Noel told the Daily Dot: “because we want to get Trump’s intervention” into the death of Prince. She claimed that Trump “knows exactly who we are.” Noel then insisted that Prince was poisoned by Warner Brothers records and connected the music giant to the Illuminati.

On the other side, counter-protesters were largely peaceful. There was a DJ blasting hip-hop music and a spattering of dancers. However, they were joined by a group of about 30 militant figures clad in black and carrying red and black flags with their faces covered.

Immediately after they appeared, apparent antifa members overtook the street, choking traffic as they marched through the city blocks. Near the end of the day, they tried to get into the area where the pro-Trump crowd was rallying, but they bounced off the police line.

Soon after, police on bikes began rodeoing them off the street and onto the sidewalks where the masked mini-mob lingered beside a Starbucks, chanting: “Whose streets? Our streets.”

It’s hard to say if anything was accomplished today other than the D.C. police showing that they’re up to the task of keeping opposing groups with unpopular political ideologies away from each other.

If nothing else, we learned that there are still a hell of a lot of Proud Boys willing to travel to a rally.