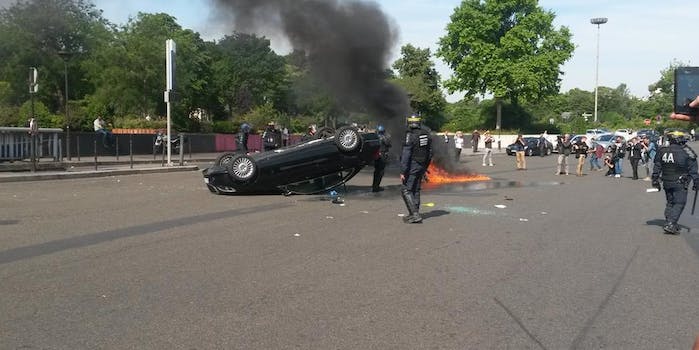 The protests even turned violent earlier this week.

A nationwide anti-Uber taxi strike in France has brought traffic to a standstill, prompting Parisian airports to advise travelers to take the train instead of driving.

Taxi drivers have blocked access to both of the city’s main airports and created roadblocks in Paris, Marseilles, and Aix-en-Provence.

The taxi drivers are striking in protest of Uber’s European UberPOP app, users of which compete for business with licensed cab services. While taxi drivers have to pay thousands of euros for a license, Uber drivers simply operate through the app—an issue that has already caused legal troubles for Uber elsewhere. According to the French taxi union FTI, taxi drivers have lost between 30 and 40 percent of their income to competition from Uber over the past two years.

The conflict between taxis and Uber in France is so intense that approximately 100 attacks on Uber drivers and passengers have been reported over the past few months. Thursday’s protests saw this anger draw mainstream attention.

Opponents say #uberpop is not safe !! Do you really want to be driven instead by this bunch of thugs?? #taxistrike pic.twitter.com/8pwozmIu2E

Photos taken outside Paris airports show huge traffic jams and some people having to walk after their cars were stopped by the roadblocks.

Courtney Love was among those caught up in the protests outside Charles De Gaulle airport. The actress tweeted that her car had been attacked by protesters.

Dude @kanyewest we may turn back to the airport and hide out with u.picketers just attacked our car #ParisUberStrike pic.twitter.com/MtanurybOO

François Hollande where are the fucking police??? is it legal for your people to attack visitors? Get your ass to the airport. Wtf???

they've ambushed our car and are holding our driver hostage. they're beating the cars with metal bats. this is France?? I'm safer in Baghdad

paid some guys on motorcycles to sneak us out, got chased by a mob of taxi drivers who threw rocks, passed two police and they did nothing

While Uber maintains its popularity in the U.S. despite many high-profile legal problems, its app has faced more resistance in Europe. Spanish Uber drivers turned to food delivery after being banned from transporting passengers, while Germany placed a nationwide ban on UberPOP earlier this year.

Last September, the French National Assembly passed the “Thévenoud law,” placing new restrictions on cab and chauffeur services. The law is intended to curb Uber’s reliance on unregistered drivers, but the company is appealing it on the grounds that it gives traditional taxi services an unfair advantage.