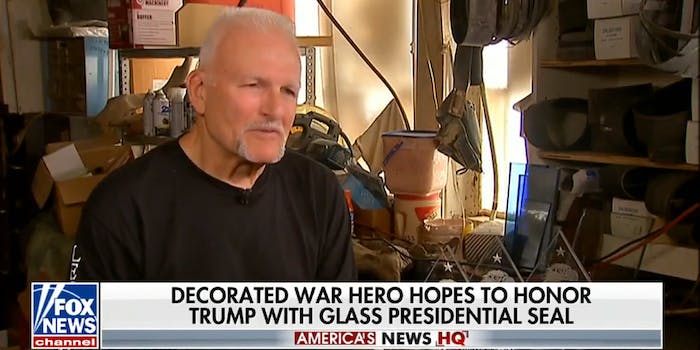 The story painted him as a patriot who had 'hope' for Trump.

Fox News has corrected a story it ran earlier this month about a glass artist who claimed to be a retired Navy SEAL after discovering that he lied about the specifics of his time in the military.

The story, which ran on Oct. 8, highlighted John Garofalo–who created a large glass presidential seal he hoped to give to President Donald Trump. In the segment, Fox News describes him as a “highly decorated Navy SEAL,” who served in Vietnam and wanted to gift Trump because he “woke something up” in him.

Garofalo’s presidential seal was 4 feet high, 150 pounds, and made out of glass and bronze.

While the seal he created exists, Garofalo’s claims about his military experience were bogus.

“Unfortunately, all of Garofalo’s claims turned out to be untrue,” Fox News wrote in a correction posted on its website. “The fact is that he did not serve in Vietnam. He was never a U.S. Navy SEAL. Even though he showed us medals, Garofalo was not awarded two Purple Hearts or any of the other nearly two dozen commendations he claimed to have received, except for the National Defense Service Medal.”

During the segment, Fox News paints Garofalo as a “patriot” who had “hope” for Trump and the country because of the 2016 election, adding that he voted for Trump because he was having a “tough time” as a small business owner.

Fox News said Garofalo is a veteran who served in Spain, not Vietnam.

White House Press Secretary Sarah Huckabee Sanders did not immediately respond to a request for comment from the Daily Dot as to whether Trump will accept the gift from Garofalo.

In an interview with the Army Times, Garofalo admitted that he had portrayed himself as a Navy SEAL and Vietnam veteran for years.

“It got bigger and bigger,” Garofalo told the news outlet. “What I did I‘m ashamed of, and I didn’t mean to cause so much disgrace to the SEALs.”

Correction: Fox News corrected its story but it did not issue a retraction. We have updated the headline to reflect this correction. We regret the error.