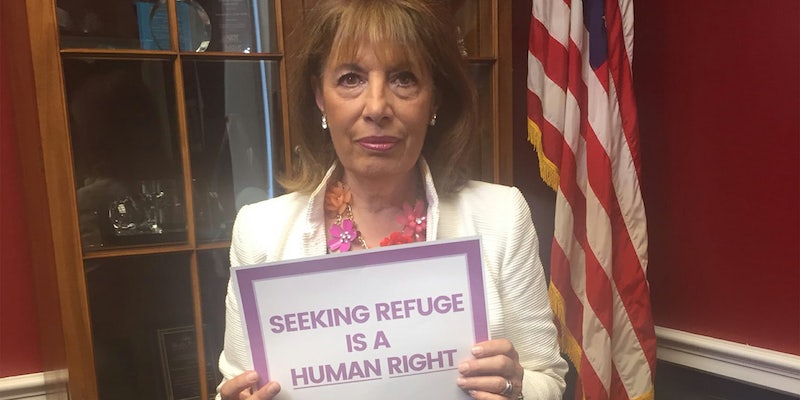 Congresswoman’s plan to reunite families separated at the border: 23andMe

Representative Speier hopes the DNA testing company will do what the government won’t.

Rep. Jackie Speier, of California’s 14th district, has asked the DNA testing company 23andMe for assistance in reuniting children who were separated from their parents at the border.

Trump signed an executive order on Wednesday, ending the policy of separating children from their parents entering the U.S.-Mexico border. However, this does not apply retroactively to the families who have already been separated, for whom there are no solid plans for reunification. According to Rep. Speier, this is where 23andMe could come in. Speaking to BuzzFeed News, Speier explained her thought process, saying, “I was just trying to think, how are we going to connect these two? How can we guarantee that the parents are going to get their own child back?”

Speier believes intervention from a company like 23andMe may be necessary because there is difficulty identifying the family on both the parent’s and child’s side. According to public defender Erik Hanshew, who wrote for the Washington Post about his experience working with detained immigrants whose children have been taken from them, there are no answers as to where their children are, or if they will ever see them again. He reported a federal judge getting angry with an agent in the courtroom, saying, “If someone at the jail takes your wallet, they give you a receipt. They take your kids, and you get nothing? Not even a slip of paper?”

On the other side of the equation, Speier points out that some of the children who were taken from their parents are simply too young to be able to identify them, saying to BuzzFeed, “If they’re under two, they don’t know [who their parents are]. It’s horrible.” The hope is that 23andMe might be able to bridge the gap left by the astonishing lack of documentation provided in these family separations.

Thursday afternoon the CEO of 23andMe, Anne Wojcicki, acknowledged the requests that they assist in the reunification of families.

We've heard from many of our customers that they would like to see 23andMe help reunite family members that were tragically separated from each other. Connecting and uniting families is core to the mission of 23andMe. We would welcome any opportunity to help.

However, the company has not yet committed to any specifics of how they would, or if they will help. For now, the parents will have to continue waiting and hoping.