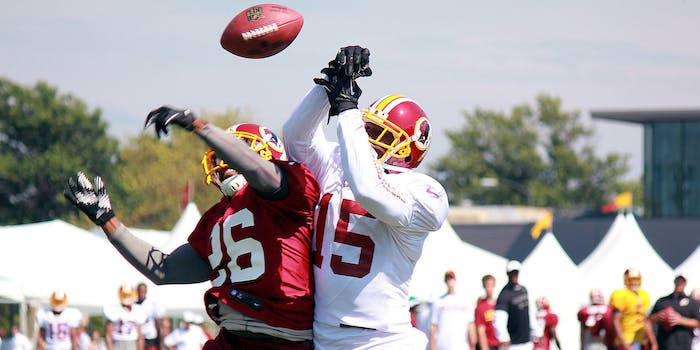 On Tuesday morning, the Federal Communications Commission voted to eliminate the sports blackout rule, meaning that fans around the country will now be able to watch their hometown teams play on local TV no matter how many tickets to the games are sold.

Prior to this rule change, if a sports game didn’t fill the stadium to capacity, then that game couldn’t be shown on nearby broadcast television stations. The rule was put in place to protect teams’ ticket sales because if fans knew they could just watch their favorite team play for free without having to get up from the couch or put on pants, they wouldn’t have much incentive to shell out hard-earned cash for a seat in the bleachers.

The rule affects all sports leagues, but is most closely associated with the NFL because, as the New York Times notes, the NFL is the only major professional sports league that negotiates its TV contracts. In the other leagues, each individual team strikes its own deals with broadcasters to show its games.

“It is a simple fact, the federal government should not be party to sports teams keeping their fans from viewing the games. Period,” FCC chairman Tom Wheeler said during the hearing. “This is an opportunity, and I hope the NFL will seize on this opportunity, to repudiate blackouts, just as we are about to here.”

The NFL has lobbied hard for the agency to keep the rule in place with publicity campaigns like Protect Football On Free TV, but its efforts ultimately didn’t prove particularly persuasive. The vote to end blackout was unanimous among all FCC commissioners.

As Wheeler implied, the ball is largely still in the NFL’s posession. The league could decide to voluntarily black out games on its own, as part of its contracts with broadcasters.

Blackout rules have been in place for generations. In the 1960s, all NFL games were blacked out. In fact, the first seven Super Bowls were blacked out in the cities where they were held. The universal blackout rule was waived in the early 1970s, such that only games that weren’t sold out within 72 hours of their start times would be prohibited from being shown on local TV.

The NFL has threatened that, if the FCC were to eliminate the blackout rule, it might elect to pull its games from broadcast TV entirely, instead shifting exclusively to cable or satellite providers. This threat was enough to spur some lawmakers into action. In July, the Congressional Black Caucus wrote a letter to Wheeler urging him to keep the rule due to fears that such a switch could price many lower-income Americans out of the ability to watch football games.

We believe the current system works well, especially for fans that rely on broadcast television. During the 2013 season, 99% of NFL games were sold out and broadcast on free, local TV. Moreover, the NFL is the only sports league that makes available all of its games, both regular season and playoffs, on free television. Moreover, these live events are not only the most watched programming on television, but also support jobs, businesses and taxes for local communities.

The NFL’s current broadcast TV contracts run for the better part of a decade, so it wouldn’t be until 2022 that the league could likely make good on its threat.

On Twitter, the reaction to the FCC’s move was almost uniformly positive among sports fans:

Today is a big day for sports fans. The FCC has voted unanimously to repeal blackout rules for sporting events. #RSM330