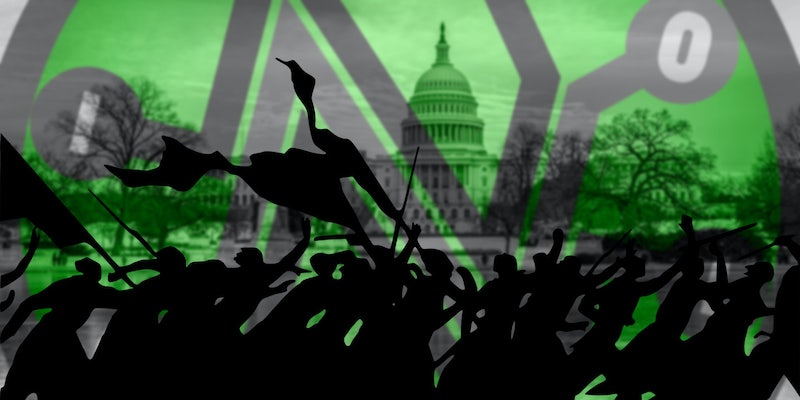 Here's where some of the major players stand.

The latest salvo in the net neutrality battle is a huge one. FCC Chairman Tom Wheeler announced on Wednesday that he would push his agency to implement strong rules protecting net neutrality.

Wheeler’s approach, outlined in a Wired op-ed, relies on Title II of the Communications Act of 1934. Title II is the boldest of several possible approaches to net neutrality rules. Wheeler’s plan would essentially classify the Internet as a utility, allowing the FCC to regulate the behavior of Internet service providers to protect the equal transmission of Web traffic.

The long-running debate over how, if at all, the government should protect net neutrality has attracted the attention of Internet activist groups, consumer watchdogs, public policy think tanks on the right and the left, and, of course, the massive and powerful cable industry. To understand the debate, it’s important to know what the major stakeholders are saying.

In this post, we’re collecting responses to Chairman Wheeler’s op-ed from groups on both sides of the net neutrality debate.

“This is a historic moment in the history of the internet. It’s the result of nearly a decade of work raising the alarm about the dangers of online discrimination and ongoing attacks on the open internet. Chairman Wheeler deserves high praise for doing what his predecessors wouldn’t — taking a bold stand in favor of internet users.”

“CALinnovates remains concerned about the application of utility-style regulation of the Internet – regulation that won’t even explicitly ban paid prioritization. What we need more than anything is to have bipartisan and bicameral legislation that affirmatively protects the Internet from throttling, blocking, and paid prioritization that won’t be subject to the political whims of future Presidents and FCC Chairmen.

“Unfortunately, when the FCC votes to reclassify, it will simply mark the beginning of another long Washington process that won’t end anytime soon.”

“The open Internet that has served as a true equalizer was strengthened today with the FCC’s proposed rules. By clearly banning discrimination, whether through paid prioritization, throttling, or blocking, the FCC has protected the foundation of the democratic Internet. This is an important day for everyone who enjoys the benefits of a fair and open Internet.

“The FCC’s Title II approach creates the stable and enforceable legal authority necessary to preserving an open Internet. Details on how the FCC will protect the interests of consumers, including privacy, are still necessary. However, the proposed rules show that the Commission clearly listened to the American people and delivered very strong open Internet rules.”

“Chairman Wheeler’s announcement today is the culmination of a decade of dedicated grassroots organizing and advocacy. We’re now one step closer to restoring real public interest protections to our nation’s communications policies. If the full FCC adopts the chairman’s proposal, and it’s free of any last-minute surprises, then everyone’s right to communicate freely online will be secured. We commend Chairman Wheeler’s actions and his willingness to listen to the facts in the face of a fiercely dishonest industry lobbying effort.”

“We must remain vigilant to ensure that the details are right, but the FCC’s announcement that they are officially moving toward Title II based net neutrality rules is a historic, massive, and unprecedented victory for grassroots activists and Internet users. Today we proved that SOPA was not a fluke. The Internet came together and we are on the brink of defeating one of the best funded and most sophisticated lobbying operations in history. Keep the pressure on until February 26th, but grab yourself a drink today, you deserve it.”

“Public Knowledge commends Chairman Wheeler for siding with network users by announcing his support for strong Open Internet rules grounded in Title II authority. This is a historic announcement by Chairman Wheeler, and a decision that consumers have been demanding for some time. Americans have waited over a year for the FCC to restore the Open Internet protections that were vacated by the DC Circuit Court.

“Of course we look forward to seeing the actual language of the rules before fully evaluating their strength and impact, but we are very encouraged by the Chairman’s announcement today. By reclassifying broadband under Title II, the FCC will preserve its ability to maintain core consumer protections needed for communications networks, with appropriate forbearance from other parts of the statute. His approach uses a scalpel, not a cleaver, to avoid subjecting broadband providers to parts of Title II that may not be applicable to their services. We appreciate this thoughtful approach and look forward to seeing its details.”

“This course of action may please some stakeholders in the short run, but in the long run, the FCC’s decision will be shown to be unfounded and illegitimate.  Moreover the forced process for the decision undermines the credibility of the agency and may ultimately lead to its demise.

“It’s nice to see that the FCC has a Chairman with an opinion.  However it is unfortunate that the FCC has not taken the steps to provide the objective information gathering and analysis necessary to justify classification of broadband to Title II.  While expert testimony and public comment are interesting and helpful, ultimately a regulatory agency has to base its decision on facts.  Those facts would be assembled in a report and published as justification for the reclassification.”

“Chairman Wheeler’s proposal to regulate the Internet as a Title II public utility is an unprecedented expansion of FCC power with heavy regulation of the Internet for the first time. This proposal would stifle investment, innovation and consumer choice.  Worse, the Chairman’s plan could have spillover effects into the broader Internet ecosystem and threaten Silicon Valley companies that rely heavily on the Internet.

The Chairman’s plan to widen the FCC’s authority over interconnection contradicts previous assertions that this issue would be kept separate from net neutrality as well as the conclusions of prior FCC commissions, who have held interconnection issues as separate and distinct from net neutrality. There is no market failure to justify such an aggressive intervention – in fact, the market is highly competitive with a track record of working efficiently and benefitting consumers. In this current dynamic Internet environment, it is impossible to predict future usage patterns, content offerings and capacity needs. Therefore, regulation of these complex relationships would likely be costly and impede the Internet’s ability to serve consumers’ ever-changing needs.

Rather than jeopardize innovation and create legal uncertainty with burdensome new regulations, we urge Congress to work together to establish bipartisan legislation that would codify net neutrality principles and maintain the openness of the Internet. It is critical that our leaders come together to protect the bipartisan-led framework that has advanced the extraordinary growth and deployment of high speed Internet for nearly two decades.”

“This regulation will essentially cause consumers to pay more for less. In addition to imposing a new annual fees on each broadband subscriber, the FCC’s proposal will almost certainly cause Internet providers to invest less in their networks, meaning consumers and internet-based services will see fewer speed and reliability improvements. If Congress doesn’t rein in the FCC, broadband providers will soon look and act like power companies and the old Ma Bell telephone monopoly: stagnant, slow-moving, and anything but innovative.”

“Chairman Wheeler’s proposal to regulate the Internet as a public utility is not about net neutrality – it is a power grab for the federal government by the chairman of a supposedly independent agency who finally succumbed to the bully tactics of political activists and the president himself. If the only objective behind the FCC’s new proposal was to protect an open Internet and establish net neutrality rules, we could accomplish that through bipartisan legislation and avoid the years of uncertainty and litigation created by Chairman Wheeler’s radical proposal. Despite my repeated attempts to engage Chairman Wheeler and President Obama in a constructive dialogue, neither have stepped forward to work with Congress on bipartisan rules that prohibit practices such as throttling, blocking, and paid prioritization.

“Regulating the Internet through ill-suited and antiquated authorities that were designed for the monopoly phone era will ultimately make the Internet more rigid and less innovative. The FCC’s proposal puts in play new taxes and fees for consumers, an expanded federal government role in determining the direction of future growth and technology development, and more power for Washington over the Internet at a time when there is increasing concern about governments around the globe abusing their authority over the Internet to spy on their own citizens and restrict the free flow of information. This is not good for consumers and is not the vision of an open Internet that Americans want. As the public learns more details about the FCC’s overreaching proposal in the coming days and weeks, I believe that the merits of a legislative solution will become undeniable. I am determined to work with my colleagues to find a better path forward regardless of what the FCC decides.”

“Heavily regulating the Internet for the first time is unnecessary and counterproductive. It is unnecessary because all participants in the Internet ecosystem support an open Internet, and the FCC can address any harmful behavior without taking this radical step. Moreover, Congress is working on legislation that would codify open Internet rules once and for all. It is counterproductive because heavy regulation of the Internet will create uncertainty and chill investment among the many players — not just Internet service providers — that now will need to consider FCC rules before launching new services.”