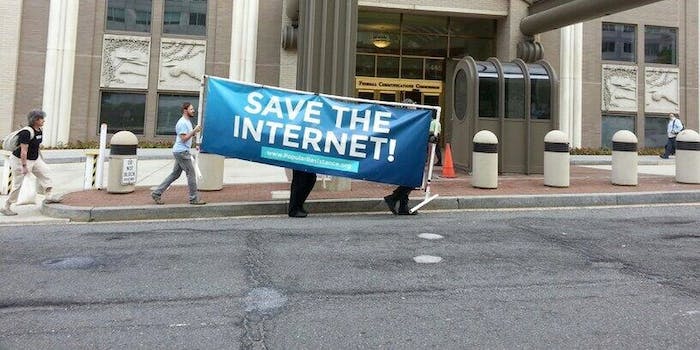 How to watch the FCC net neutrality meeting live

You'll be there in spirit.

The future of the Internet is in jeopardy.

That’s the rallying cry among activists who’ve gathered outside the Federal Communications Commission (FCC), as the agency prepares for a Thursday meeting to discuss new rules that could either preserve or fracture net neutrality.

Taking a cue from the Occupy Wall Street movement, several of these net neutrality demonstrators, led by the activist group Fight for the Future, have been camped out for more than a week. Those who couldn’t make it to Washington, D.C., could still experience Thursday’s rally through a livestream that has since gone off air.

What happens at Thursday’s FCC 10:30 a.m. ET meeting will give us a better sense of whether the agency wants to maintain an open Internet, as it once promised, or, as later reported, pave an Internet “fast lane,” through which content providers like Netflix could pay Internet service providers to deliver their data to customers at faster rates. The flip side is that services that don’t pay will be relegated to Internet “slow lanes.”

To get a front-row seat in the FCC’s meeting, simply click here or here and launch the video, which should go live as soon as the meeting begins.

Read this for more background on the various scenarios would affect the Internet. Here are a few images of the scene at the FCC building Thursday morning.

Photo by Fight for the Future/Twitter