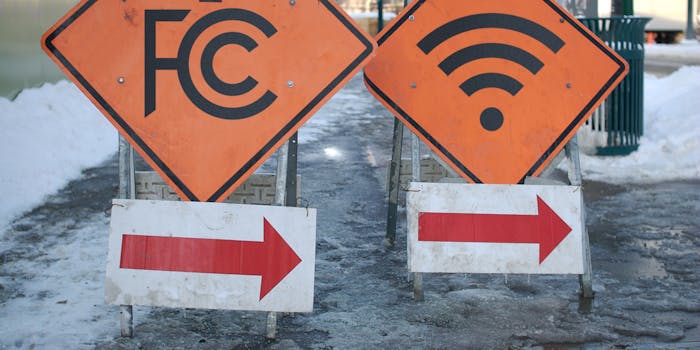 The FCC isn't shying away from conflict.

The FCC gave Big Internet yet another cause to worry on Thursday, scheduling a vote on federal assistance to community broadband networks that is expected to only heighten tensions between the regulator and its conservative opponents.

The Feb. 26 vote, first reported by the Washington Post, comes in response to requests from two cities—Chattanooga, Tenn., and Wilson, N.C.—for federal intervention in legal battles over municipal broadband. Tennessee and North Carolina, which are both deeply conservative states, have laws prohibiting cities from setting up their own broadband networks for residents. These laws are the result of lobbying from quasi-monopolistic telecom companies that do not want local competition.

On Wednesday, President Obama asked the Federal Communications Commission to preempt laws in Tennessee, North Carolina, and 17 other states that prohibit municipal broadband. Also on Wednesday, the Obama administration released a report touting “the benefits of competition and choice for community development and highspeed [sic] Internet access.”

The report noted that Obama was asking the FCC to address “barriers inhibiting local communities from responding to the broadband needs of their citizens.”

FCC Chairman Tom Wheeler has long opposed such barriers. In April 2014, he told a cable industry conference that his agency was prepared to take the step that Obama has now requested.

“I believe the FCC has the power—and I intend to exercise that power—to preempt state laws that ban competition from community broadband,” Wheeler told attendees at the Cable Show conference.

State prohibitions on municipal broadband are the product of intense lobbying from organizations such as the National Cable & Telecommunications Association (NCTA), a consortium that includes leading Internet service providers Comcast and Time Warner. When cities establish their own broadband networks, they offer alternatives to commercial ISPs, forcing those companies to either improve their services or reduce their prices.

The principle behind municipal broadband is similar to the principle driving support for a public option in healthcare: Competition reduces prices and improves efficiency. It’s a market-driven philosophy that should garner conservative support. But the corporations that make up the NCTA would stand to lose from this competition, so their conservative allies in state capitals and on Capitol Hill are rallying against municipal broadband.

Rep. Blackburn received a combined total of $41,000 from groups and individuals associated with the major telecom companies and the NCTA in her 2014 re-election campaign. That includes $11,000 from Verizon and $10,000 each from AT&T, Comcast, and the NCTA.

The FCC meets monthly to vote on proposed actions. Its Feb. 26 meeting will also include a vote on net neutrality that is expected to lead to fierce congressional debate and outside lobbying. Chairman Wheeler has indicated that the commission will approve the strong net neutrality provisions that have Obama’s backing.