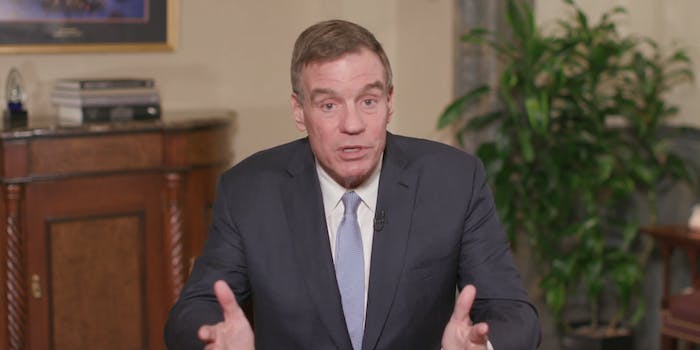 Are taller antennas the key to bridging the digital divide? One senator says so

Mark Warner is one of a number of lawmakers who have said the FCC needs to take more action.

Sen. Mark Warner (D-Va.) is urging the Federal Communications Commission (FCC) to take steps to close the digital divide, adding that the issue has been “magnified” because of the coronavirus emergency.

The pandemic has forced Americans to work and be schooled from home—a shift that has highlighted the digital divide in the country, or the gap between Americans who have access to the internet and those who don’t. Some estimates say 20 million Americans don’t have high-speed access.

Warner, the ranking member of the Senate Intelligence Committee, wrote a letter to the FCC earlier this week.

“Eliminating the digital divide is the 21st-century extension of the Federal Communications Commission’s original universal service mandate. The importance of this effort—and the extent of remaining work to be done—has only been magnified in the wake of the COVID-19 pandemic,” Warner wrote in a letter to the FCC commissioners, later adding: “Under the current circumstances, this lack of broadband access threatens to greatly—and potentially lastingly—exacerbate disparities in health, education, and economic equity.”

In another letter, Warner commended some of the FCC’s recent actions, but added that “much more work remains to be done.”

Specifically, Warner urged the FCC to allow for higher antennas and to increase power limits for wireless providers. The raised power limits and increased height of antennas would allow the signals to travel farther, theoretically reaching more people.

The FCC has a presumptive policy of refusing antennas over 2,000 feet.

In recent weeks, a number of lawmakers and experts have called on the FCC to help keep Americans connected during the pandemic.

The agency has implemented a number of changes to certain programs—but it’s most visible action has been getting broadband and telephone providers to sign on to its “Keep Americans Connected” pledge, a non-binding vow to not shut off service if customers can’t pay their bills.

However, recent reports have shown that some Americans are still being disconnected despite the pledge.

Last month a group of bipartisan senators introduced a bill that would create a $2 billion fund at the FCC for broadband providers with less than 250,000 customers to access if they offer free or discounted service during the pandemic.

Other lawmakers have asked the FCC to create a web portal for people to get more information about how to stay connected and to use the agency’s E-Rate program to give schools a discount on devices that would help students get online.

Meanwhile, advocates have suggested that Congress make sure that people’s broadband connection and other utilities cannot be shut off for an extended period of time at the end of the coronavirus pandemic.