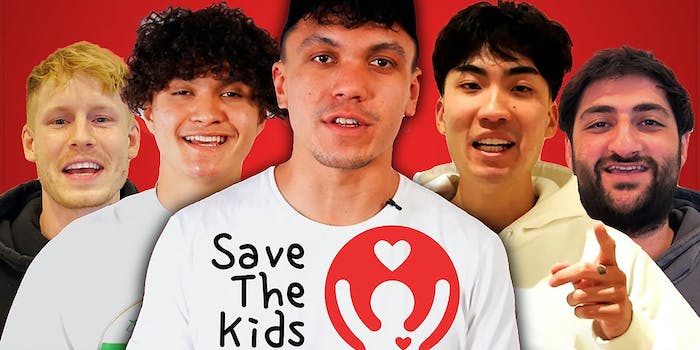 People were outraged by the allegations.

Four members of the immensely successful esports group FaZe Clan are accused of running a Ponzi-type scheme involving a cryptocurrency that was supposed to benefit children’s charities.

FaZe members Kay, Jarvis, Nikan, and Teeqo are accused of using their platforms to hype the Save the Kids ($KIDS) crypto, artificially inflating its value, then selling their shares at a handsome profit, otherwise known as a “pump and dump” scheme. Kay, who’s been accused of crypto manipulation in the past, has been kicked out of the group; the other three are suspended, Business Insider reports.

YouTuber OrdinaryGamers broke the story of how four allegedly scammed people into buying the altcoin $KIDS, which was to donate part of its proceeds to causes benefiting children.

After they hyped the coin, $KIDS’ value skyrocketed, OrdinaryGamers said. The four allegedly then sold their shares at a sizable profit, Business Insider reports, and the coin quickly lost 90% of its value. Around this time, they deleted their tweets promoting it.

Kay apologized and claimed that he never intended to hurt anyone.

“I want you all to know that I had no ill intent promoting any crypto alt coins. I honestly & naively thought we all had a chance to win which just isn’t the case. I didn’t vet any of this with my team at FaZe and I now know I should have,” he tweeted.

The crypto market has become notorious for such schemes in recent years. In May, the Federal Trade Commission said that Americans had lost $80 million to crypto scams since the prior October. Prior to his death, the recently deceased John McAfee was charged of fraud and money laundering related to alleged crypto scams.

FaZe clan has 80 members and a cumulative following of tens of millions around the world. Last month, it became the first esports group to be featured on the cover of Sports Illustrated.

People were outraged by the allegations.

“There are people who are literally putting their livelihoods on the line,” OrdinaryGamers said in his video.

The four and FaZe clan were lambasted online.

In a statement released on Twitter, FaZe clan said it “had absolutely no involvement with our members’ activity in the cryptocurrency space, and we strongly condemn their recent behavior.”