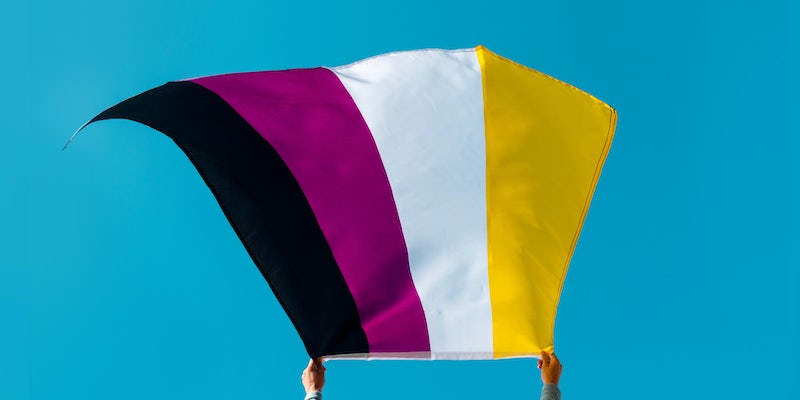 They don't think it's possible to be nonbinary and a violent right-wing extremist.

The LGBTQ community is still reeling from last weekend’s mass shooting at Club Q in Colorado. Five were killed and 19 injured in a matter of minutes before a brave patron tackled and subdued the shooter.

Now the far right is using the shooter’s choice of pronouns to mock a grieving community.

The alleged shooter, Anderson Lee Aldrich, is charged with murder and hate crimes over the shooting, which many believe was motivated by homophobia and possibly far-right extremism. Aldrich is the grandson of a Republican assemblyman in California who has favorably compared the Capitol riot to the American Revolutionary War.

On Tuesday, the shooter’s attorney told the court that Aldrich identifies as nonbinary.

The far-right is thrilled. In their minds, it’s impossible to be nonbinary and a right-wing extremist.

Extremist Tommy Robinson wrote victoriously of the news that the alleged Colorado shooter identifies as nonbinary, “There goes their whole narrative,” along with a laughing emoji.

Proud Boys-adjacent Telegram channel the Western Chauvinist referred to the shooting as “system on system violence” and suggested Aldrich using they/them pronouns is “why we’re not hearing very much about the Club Q shooting anymore.”

Others expressed similar sentiments. “And just like that, the media is done talking about the Club Q shooting,” Charlie Kirk said on Telegram.

However, some are questioning the sincerity of Aldrich’s claim to be nonbinary.

In a video of a 2021 arrest that was obtained by CNN, Aldrich referred to himself as “boy.”

A neighbor and former friend told the Daily Beast that Aldrich frequently used a homophobic slur for gay men. A screenshot of an Instagram account that purportedly belonged to Aldrich contains a single post of an LGBTQ Pride flag burning.

Meanwhile, the night of the killing, Aldrich’s mother reportedly posted that her son was missing and referred to Aldrich with male pronouns.

Given some of the evidence, people online have speculated this might be a ploy to avoid hate crime charges or trolling against the LGBTQ community.

That’s a possibility the far-right is refusing to accept, gleefully embracing it to mock gender identity in general.

They’re calling out the media for misgendering Aldrich, despite previously having never cared to respect pronouns.

In the wake of a mass murder, it’s particularly galling.

“Literally even if they are non-binary it changes NOTHING about the fact that they went into a happy place and turned a safe, fun night into a tragedy,” commented one.