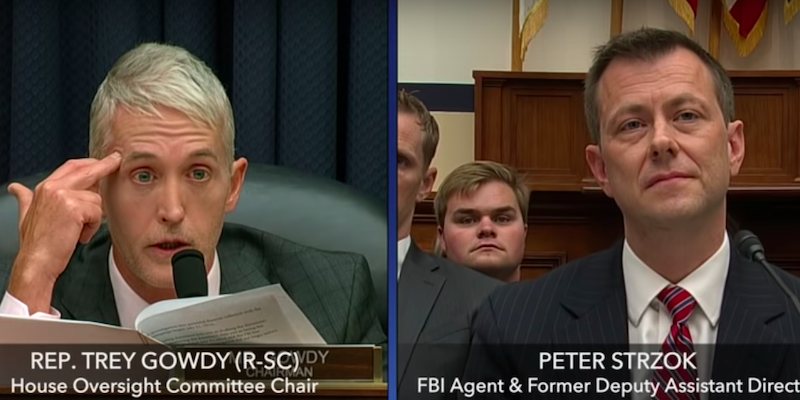 Peter Strzok, the FBI agent who single-handedly sank the campaign of Donald Trump, went to Capitol Hill yesterday to answer to Republican representatives still reeling in the second year of Hillary Clinton’s presidency.

Republicans have been up in arms ever since it was revealed that Strzok, who worked on both the Hillary Clinton email and Trump-Russia investigations, exchanged texts with a co-worker about his disdain of Trump.

!!! STRZOK: in summer 2016, i was one of the few people on the russia investigation who had information that had "the potential to derail, and quite possibly, defeat Mr. Trump. but the thought of exposing that information never crossed my mind."

With that in mind, that he could have sunk Trump, didn’t, and then went about doing his job, Republicans in the House of Representatives spent the all day yesterday berating him for expressing distaste for the president.

And those on the far-right, who have made a boogeyman of Strzok since February, were living for this destruction of (again), the person who, like, didn’t leak to the New York Times in the run-up to the election that the president was a Russian asset.

Leading the charge was the hyper-conservative blog the Gateway Pundit. Here are the headlines from the seventeen (17!!) stories they did about Strzok, who again, brought about the hellscape that is the candidate conservatives didn’t want to be president not being president.

Mike Flynn Jr. Sounds Off on Peter Strzok ‘This Man Interviewed My Father, Let That Sink In’

FIREWORKS! REP. GOHMERT GOES THERE! — Calls Out Cheater Strzok for Lying to His Wife About Lisa Page! (VIDEO)

Peter Strzok: My Nasty Anti-Trump Text Messages Were Expressed “Out of Patriotism” (VIDEO)

Also, not that it’s terribly relevant, but if you are wondering into some of those blog posts’ lob accusations about how Strzok also covered up incidents of pedophilia, well … yea, of course, they do. He is literally the devil in their eyes.

Completely real. I personally recorded it from my tv. I was so shocked when I saw it and played it back. I only cut the first part of the arguing. This is the full recording I captured. I couldn’t believe it. pic.twitter.com/fL3Ji16qP1

How is Peter Strzok real. pic.twitter.com/l49hTbpXdY

Either Strzok is a Sociopath or demon possessed.

Wow. This man appears almost demon possessed with his movements.

But it wasn’t just Strzok that drew the ire of conservatives yesterday.

Over on the Daily Wire, another leading conservative site, this sentence was written with a straight face about Democrats attempting to stall the hearing, which was entirely an exercise in conservatives berating a person they didn’t like:

But from the outset, it was clear that Democrats had no intention of gathering information — or doing their jobs, namely to conduct legislative oversight over the FBI.

Instead, they turned the hearing into a partisan show of political grandstanding and feigned outrage.

Gowdy also grilled Strzok about his texts where he talked about impeaching Trump after the Mueller investigation began, then asked why he never texted with anyone about impeaching Hillary Clinton.

Clinton, no matter how bad it appears Republicans want her to be, is not the president.