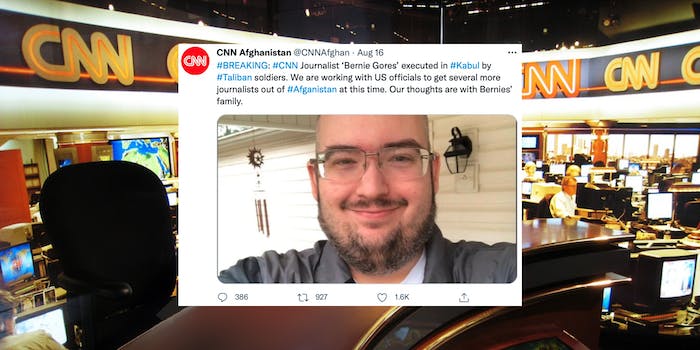 None of the accounts are verified on Twitter, and all of them were created earlier this year.

Twitter accounts claiming to be associated with major news organizations tweeted out claims Tuesday morning that a CNN journalist had been executed by the Taliban.

But the tweets are unverified, and the journalist doesn’t appear to exist.

Three accounts that labeled themselves as Afghan news accounts for CNN, MSNBC, and BBC all tweeted out a photo that is apparently of “Bernie Gore,” supposedly a reporter at CNN.

Each of the tweets read: “#CNN Journalist ‘Bernie Gores’ executed in #Kabul by #Taliban soldiers.”

Though the tweets claim Bernie Gores is employed by CNN, his byline isn’t anywhere on the network’s website.

All the accounts were suspended by mid-day Tuesday, but not before their tweets had wracked up dozens of retweets, with the @CNNAfghan account’s tweet reaching more than 900 retweets and 1,600 likes before being deleted.