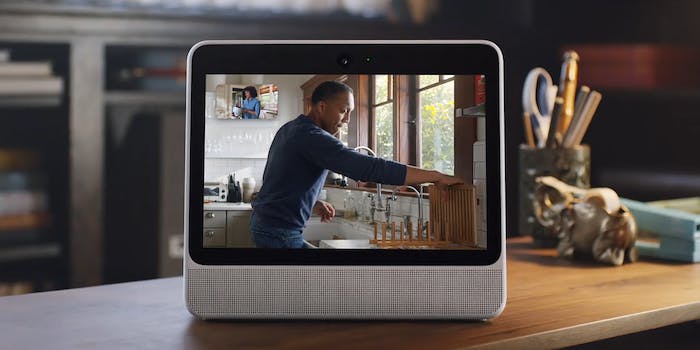 The reviews, made for both Facebook’s Portal and Portal+, were first discovered Thursday by New York Times reporter Kevin Roose. Suspicious of the glowing praise for the controversial device, Roose searched the reviewers’ names on social media and discovered profiles belonging to Facebook employees.

“Speaking of coordinated inauthentic behavior, what are the odds that all these 5-star Facebook Portal reviewers on Amazon just happen to have the same names as Facebook employees?” Roose asked.

One employee, Javier Cubria, celebrated the “really cool camera tracking tech,” while another, Oren Hafif, highlighted the “sound quality” of the device’s speaker.

In a lengthy review, Facebook employee Tim Chappell claimed that although he wasn’t a “big Facebook or other social media user,” he opted to purchase 5 Portals for him and close relatives.

“I would recommend this product to anyone who has family or friends that they enjoy staying in contact with,” Chappell wrote.

Although the 5-star reviewers sharing names with Facebook staffers could have been a coincidence, Andrew Bosworth, Facebook’s vice president for augmented reality and virtual reality, appeared to verify Roose’s suspicion in a response on Twitter.

neither coordinated nor directed from the company. From an internal post at the launch: “We, unequivocally, DO NOT want Facebook employees to engage in leaving reviews for the products that we sell to Amazon.” We will ask them to take down.

“[N]either coordinated nor directed from the company,” Bosworth said.

The Facebook veteran, who added that the employees would be asked to remove the reviews, also pointed to an internal company memo urging staffers not to leave such reviews.

“From an internal post at the launch: ‘We, unequivocally, DO NOT want Facebook employees to engage in leaving reviews for the products that we sell to Amazon,'” Bosworth added.

The Portal was launched last November and met with mixed reviews given the company’s current public image issues related to numerous privacy scandals.

The company repeatedly stressed that its device would not spy on users but later admitted that some data would be used for ads.