Can it carve a space among the Web's leading sports hubs?

If your relationships with friends aren’t made tense enough by political discussion, maybe Facebook’s latest feature can help you cull your friends list. The social network announced on Wednesday the launch of Sports Stadium, a dedicated space for conversation during big events.

Twitter tends to be the social network of choice when it comes to discussing live sporting events, primarily because the Facebook newsfeed isn’t all that conducive to live reactions and ongoing conversations. Sports Stadium is the site’s attempt to siphon off some of that conversation.

Sports Stadium functions like an expanded version of the Trending news section. Users will enter into the arena by searching for the game. Once there, a feed with four tabs appears: one dedicated to live updates, one for posts from your friends, one for experts, and one for stats. The idea behind the dedicated section is to cultivate conversation while the game is happening. Instead of the mixed means of displaying information in the standard timeline, Sports Stadium shares posts in chronological order.

That change is a necessity in discussing sports, as it’s primarily reactionary. If you’re talking about a game like last weekend’s NFC Divisional playoff game between the Green Bay Packers and Arizona Cardinals—with its bizarre coin flip and wild finish—seeing those conversations populated as they happen is key to engagement.

Sports Stadium is designed to get sports fans to virtually sit down together, but it’s keeping a line of demarcation between sports fans who don’t know one another. Conversations will be kept between friends in one tab, and the posts appearing in the experts tab will come from verified users. You might run into fans of the opposition in the comments, but otherwise they’re kept at a distance—except for your friends who have rooting interests in rival squads. 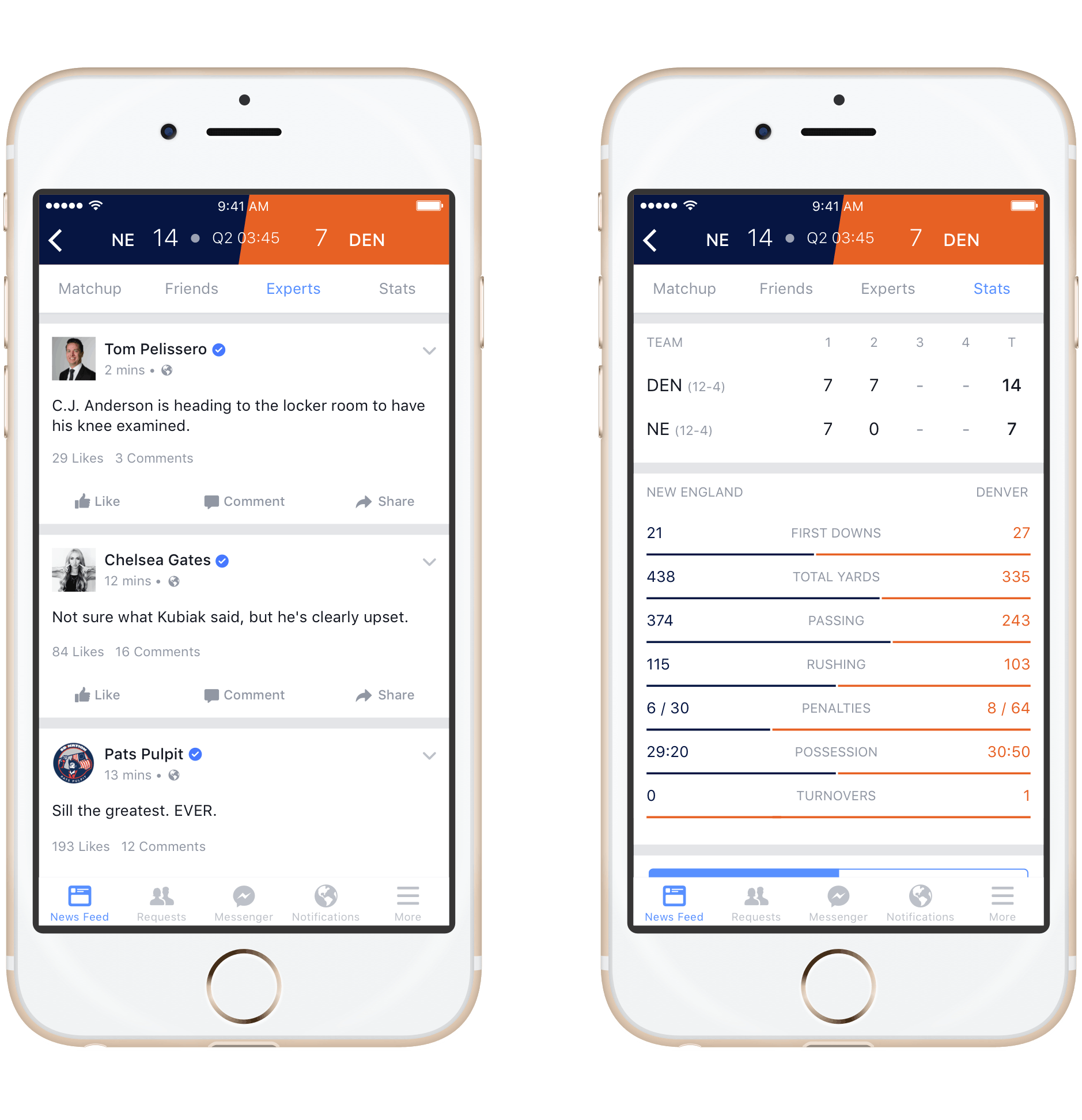 That doesn’t mean the conversation will be walled off completely, though; posts will populate standard Facebook timelines as well, which will probably encourage those who don’t care about the big game to stay off the social network until the final whistle blows.

That puts Facebook at a bit of a disadvantage to other popular hubs for sports conversations, like the wildly popular /r/NFL and /r/NBA subreddits on Reddit.

The moderator also pointed out that Facebook might be wrangling posts from friends, but Reddit gives users the ability to “get perspectives from a bunch of different fans rather than a handful or so.” Users can bounce between different related subreddits and gain additional insight or partake in conversations specific to their interests.

/r/NBA moderator swollencornholio doesn’t see Facebook’s appeal to sports fans as a threat to the community of basketball diehards. “Potentially it has the ability to keep sports talk among your friends rather than outsiders, but I don’t think it will keep the bulk of users off /r/nba because it’s not common to have friends with as much basketball knowledge as an active /r/nba member.”

The tradeoff for the overseers of the sports subreddits is that their extremely active community of fans do occasionally require management. SwollenCornholio said “quite a bit of effort goes into moderation so things do not get cluttered and users are not attacking others that deters from civil conversation,” noting the site does attract trolls—in part because Reddit is just usernames rather than accounts with names and faces linked to them.

Game days present the biggest need for moderation, Chief_McCloud said, saying for moderators it means “all hands to the pump.” The moderator didn’t expect blocking offensive content would be much of a challenge for Facebook given its powerful filtering tools, but also didn’t see Sports Stadium as a potential leach on subreddit traffic.

While things might get heated in the midst of a game, one of the strengths of the sports communities on Reddit is their ability to continue conversation even when the game ends. Facebook’s Sports Stadium will archive games and make it easy to revisit each match, but conversation surrounding each game is often just as interesting and telling as what happens on the field.

Facebook is launching Sports Stadium with an eye toward the remaining NFL playoff games, but the social network plans to expand the offering to basketball, soccer, and more in the future. It will be available only on iPhone at first, with other platforms gaining support in coming weeks.