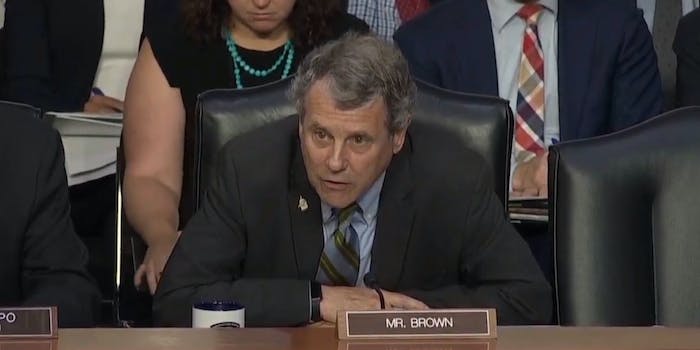 Brown made his feelings about the social media giant very clear.

Sen. Sherrod Brown (D-Ohio) ripped into Facebook during a Senate committee’s hearing about the company’s plans for its Libra cryptocurrency on Tuesday.

Brown made the remarks ahead of testimony from David Marcus, the head of Calibra—the wallet for Libra—before the Senate Banking, Housing, and Urban Affairs Committee Tuesday morning. Brown is the ranking member of the committee.

The Ohio senator made his feelings known almost immediately, starting his opening statement with “Facebook is dangerous.”

The remainder of his opening remarks were just as critical of the social media giant.

“Like a toddler who has gotten his hands on a book of matches, Facebook has burned down the house over and over, and called every arson a learning experience,” Brown said. “Facebook has two competing missions: make the world more open and connected, and make a lot of money. And as Facebook attempts to serve both these missions, they wreak havoc on the rest of us.”

As he continued his opening statement, Brown pivoted to the Libra project.

“Facebook has demonstrated, through scandal after scandal, that it doesn’t deserve our trust, and that it should be treated like the profit-seeking corporation it is, just like any other company,” Brown said, later adding: “Now Facebook asks people to trust them with their hard-earned paychecks. It takes a breathtaking amount of arrogance—a breathtaking amount of arrogance–to look at that track record and think, ‘you know what we really ought to do next? You know what we ought to do next? Let’s run our own bank and our own for-profit version of the Federal Reserve and let’s do it for the whole world.'”

Later in the hearing, Brown said distrust of Facebook was a “pretty universal feeling” on the committee, adding that it was an issue Marcus and the company needed “to deal with.”

Marcus will also testify about Libra before the House Financial Services Committee on Wednesday, where some members have asked Facebook to agree to a moratorium on the project.