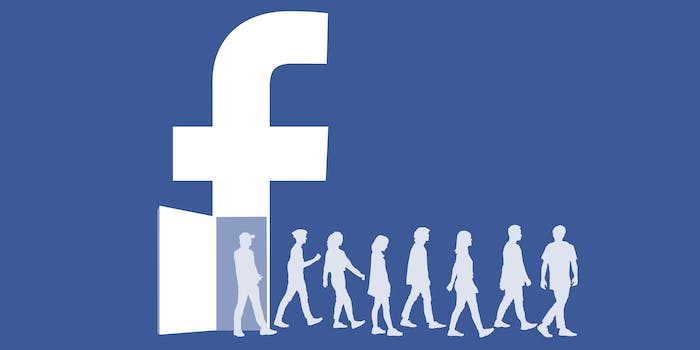 Facebook, which came under fire for contributing to the spread of fake news in the months leading up to the 2016 presidential election, is in the spotlight again. The company removed more than 800 accounts and publishers Thursday for participating in behavior that violates its rules, like overwhelming users with politically-charged spam. This move by the social media giant has reignited conversations of hyperpartisanship and political censorship.

Many of the accounts removed represented radical political views and promoted hyperpartisan content. A representative from Facebook told Axios it didn’t take political leaning into account when deciding which accounts had violated rules and that it targeted primarily those accounts that drive people to external sites called “ad farms.” Now, Facebook could take more heat for inserting itself into the political activities of its users. It came under intense scrutiny for not policing pages enough and allowing Russian operatives to use Facebook to influence the 2016 election.

The windup to the November midterms has the company working hard to distance themselves from the activities that saw CEO Mark Zuckerberg testifying before the Senate Judicial committee in April. Its recent crackdown on pages promoting political content has already been criticized, particularly by conservative groups who see the move as unfairly targeting conservative accounts.

Some of the removed accounts had been active since before the 2016 election and had racked up millions of followers. Facebook only named five of the hundreds of pages it removed, according to the Washington Post. The newspaper spoke to several page operators who claimed to be “legitimate political activists, not profit-driven operators of clickbait ‘ad farms,’ as Facebook claimed in a blog post.” They told the Post they were unsure of which rules they violated.

The announcement from Facebook explained that spam has shifted from the fake weight loss remedies and fraudulent products from a few years ago into clickbait political posts that drive traffic away from Facebook-affiliated pages and onto sites where they can be targeted with ads. Facebook also said these same people will post the same clickbait in dozens of Facebook groups, “often hundreds of times in a short period, to drum up traffic for their websites.” This violates Facebook’s policy on spam, particularly when those same culprits use fake accounts to generate more reactions and shares, boosting their engagement and improving their ranking in people’s news feeds.

Facebook has discouraged spam and clickbait for years, but in the months following the 2016 election, the company has been hard at work demonstrating its legitimacy. Accusations of contributing to the manipulation of voters damaged the company’s reputation, and it has been employing stricter punishments in an attempt to buy back the faith of users. Many of those same users feel robbed by the removal of pages promoting news stories and political views, as it can be considered free speech among domestic users.

This move from Facebook comes, in part, as a response to calls from Republican and Democratic politicians to better regulate the social media giant. Many conservatives, in particular, have accused the company of targeting right-leaning pages and accounts in its efforts to censor misleading news. During the 2016 election, Facebook refused to remove several sites peddling misleading news stories out of concern of a conservative backlash, according to the Post.

Facebook has found itself caught between steadily escalating calls to better police itself and to allow more space for freedom of speech to be practiced. Many, including the company itself, are unsure to what extent it should have the power to decide what content is and is not legitimate. The pages removed all had a clear political purpose, many posting slanted news stories from hyperpartisan viewpoints and outlets.

The changes made by Facebook are severely affecting traffic to fake news pages, as well as those that label themselves “legitimate political activists.” Claims of political bias on Facebook’s part have never been confirmed, but have been alleged by account holders and political figures.