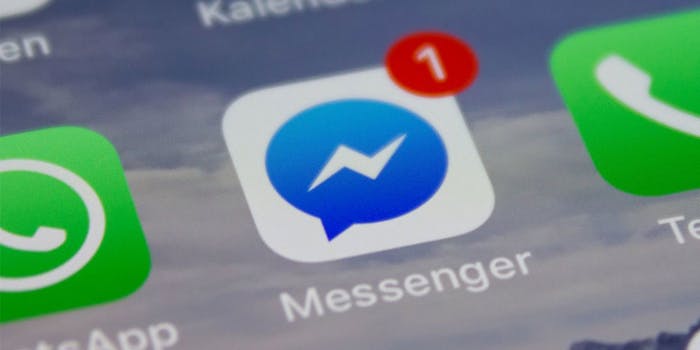 The company denies it will actually implement the idea.

A newly released patent shows that Facebook may one day place advertisements inside private conversations within its Messenger app.

The patent application outlines Facebook’s idea for a “plug-in” that would insert ads into conversations based not only on the users’ locations but on the content of their discussions as well.

In one example, Facebook suggests placing an advertisement for postcards of the Grand Canyon into a conversation moments after one user noted visiting the iconic landmark.

Although patents are regularly filed by tech companies, many of these ideas never come to fruition. Still, this patent raises questions given Facebook CEO Mark Zuckerberg’s statement earlier this year that the company plans to focus more heavily on messaging and privacy.

In a statement to Mashable, Facebook noted that the patent was originally filed more than four years ago and that it has no current plans to inject ads into conversations.

“We often seek patents for technology we never implement, and patent applications–like this one that was filed over four years ago–should not be taken as an indication of future plans,” a Facebook spokesperson said. “We don’t have any plans to place ads in conversations between people.”

If Facebook at any point did opt to put ads into private conversations, the decision would undoubtedly raise major concerns for a company already struggling with its public image in regards to privacy.

In fact, late last month Facebook was hit with a $5 billion fine from the Federal Trade Commission (FTC) for numerous privacy incidents including the Cambridge Analytica scandal.

In response, Zuckerberg claimed that privacy is now “more central than ever” to Facebook’s vision for the future.