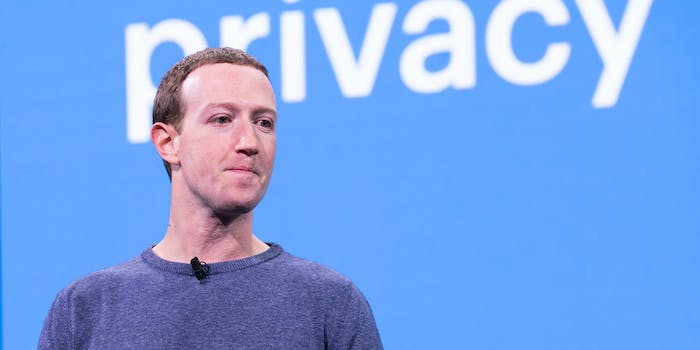 The suit calls the overpay an 'express quid pro quo'

The lawsuits, which were first reported on by Politico, were filed by shareholders in Delaware Court of Chancery and recently were made public. They claim Facebook’s board overpaid in the settlement to protect Zuckerberg.

The FTC investigated Facebook in the wake of the Cambridge Analytica scandal, where tens of millions of Facebook users had their information unknowingly harvested by the data firm. It announced in 2019 that Facebook faced a $5 billion fine.

In February 2019, the FTC sent Facebook’s outside counsel a copy of a complaint that named both Facebook and Zuckerberg as defendants, according to one of the lawsuits.

However, the suit also alleges that Zuckerberg and COO Sheryl Sandberg agreed to the FTC settlement as “an express quid pro quo to protect Zuckerberg from being named in the FTC’s complaint, made subject to personal liability, or even required to sit for a deposition.”

The suit also alleges that Facebook’s maximum monetary exposure was around $104 million, much higher than the eventual $5 billion agreement.

At the time, the FTC’s two Democratic commissioners voted against the settlement, in part because they felt the penalty was too low and that Zuckerberg wasn’t personally liable.