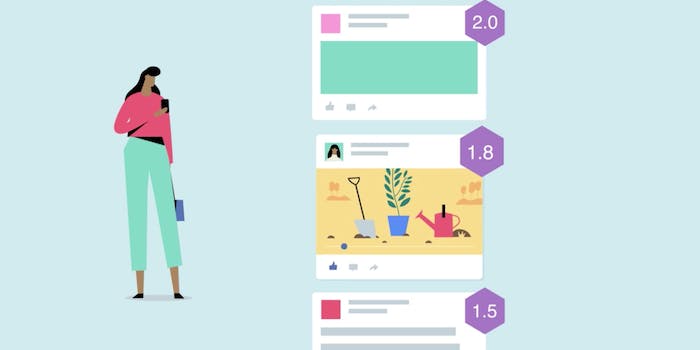 Facebook made some big changes to your News Feed.

To kick off 2018, Facebook is making some significant News Feed changes. CEO Mark Zuckerberg wants to make sure that the time you spend on Facebook is “time well spent.” To that end, you should start seeing more posts from friends and family in your feed, and fewer clickbait posts and videos from brands and publishers.

Facebook outlined the updates in a Newsroom blog post and a Facebook post by CEO Mark Zuckerberg. Basically, the social media company is re-prioritizing what shows up at the top of your News Feed so that you’re inspired to have “more meaningful social interactions.”

One of our big focus areas for 2018 is making sure the time we all spend on Facebook is time well spent.We built…

At the top of your News Feed, you can expect to see more things like: major life events (engagements, weddings, births, job announcements), personal posts detailing good and bad news in people’s lives, cultural events the public is talking about (Oprah’s Golden Globes acceptance speech, for example), and posts where someone is asking for advice or recommendations. In short, posts that typically garner a lot of Likes and Comments. This marks a change in one other significant way: It gives less weight to posts that are the most popular, and more weight to posts that encourage you to interact.

What you’re not going to see so much: posts from brands, businesses, and media. For many Facebook users inundated by these posts in their feed, this may come as a blessing. However, for brands relying on social media shares for awareness and monetization, these News Feed changes could prove disastrous for their bottom line.

On that note, Facebook’s vice president of News Feed, Adam Mosseri, told TechCrunch that he expects that “the amount of distribution for publishers will go down because a lot of publisher content is just passively consumed and not talked about.” This means that the overall time we spend on Facebook may decrease, and Pages may see their reach, referral traffic, and video watch time decrease.

While it’s actively de-prioritizing news and video, Facebook still hopes that the most newsworthy items, along with posts from “trusted” news sources, will find their way into your feed, helping users to stay informed as to the most important things going on in the world.

According to TechCrunch, “it’s rare to see a public company announce it will immediately weaken its own business to give its customers a healthier lifestyle.” However, this move may not weaken Facebook at all (at least among users who aren’t Facebook-dependent businesses or publications). Facebook has received a ton of backlash for its involvement in the 2016 election, which included selling more than $100,000 in ads to a Russian “troll farm” and spreading “fake news.” Facebook has since had to testify about its role in Russian election interference and has likely spent a large amount of money in legal fees. News, in 2016, cost Facebook a lot.

Unsurprisingly, people are disenchanted with the social network. It was originally designed to be a place for friends, but in recent years, it transformed into a place for viral videos, clickbait headlines, and ads. Facebook’s News Feed changes are designed not to temporarily weaken its business, but to save its business by attempting to restore the value proposition Facebook users originally signed up for.

If time spent on the site was indeed netting the social network a hefty profit and these changes would completely negate that, it’s unlikely Facebook would have implemented these News Feed updates. On top of that, time spent on the app and website is only one of many metrics the company can use to measure success. In future earnings announcements, you can expect Facebook will instead tout different stats, such as the average number of comments on posts, the number of friends users interact with on a daily basis, or other activity-centric data points to mark company growth and improvement.

For Facebook, it’s win-win: Users get to see more from friends and hopefully will end up using the site in more measurably meaningful ways. The main losers with these News Feed changes are those who’ve built their business capitalizing on social media shares, which time has proven repeatedly is unwise.