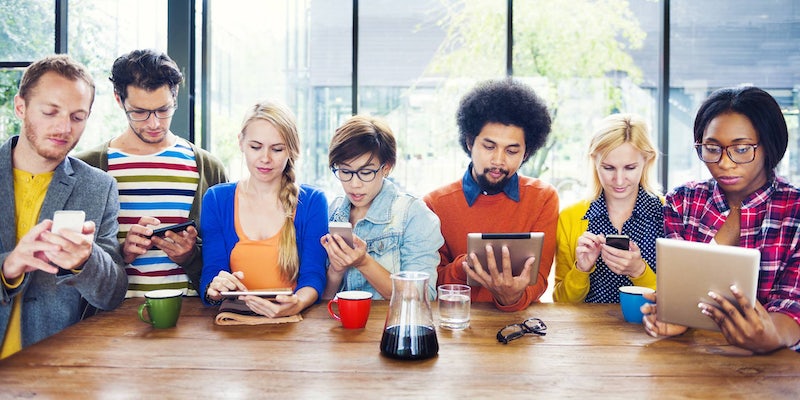 Once again, Facebook is making changes to how it shows posts.

Facebook, the enormous network on which 1.65 billion people scroll aimlessly through news feeds every month, is making it so real people, not brands or publishers, appear more frequently in your feed.

The company announced changes to its news feed algorithm that will favor content from folks you’re friends with on Facebook. This means you’ll start to see more posts from people and less news or information shared directly from Pages on your feed.

In a blog post, Facebook said Page owners can expect to see traffic decline, but if people are sharing links to their own feeds and not just clicking on stuff Pages post, they are less likely to see a loss in traffic.

Facebook’s move has publishers concerned. The sheer size of the social network accounts for large portions of websites’ traffic, and Facebook has pushed companies and organizations to invest time and energy into cultivating a presence on it, knowing the power it wields as a firehose of information aimed directly at the eyeballs of millions of people every day.

Companies invest in things like Instant Articles and Live video with the promise of a greater reach as Facebook tweaks its secret sauce to display information differently. So when Facebook makes changes that favor people, not things, the efforts to play nicely and acquiesce to Facebook’s content desires are for naught.

But Facebook has always been a place for friends. Its roots are in the human identity, the connection between people, the things they Like, and photos taken years ago that creep back up in “On this day,” memories. It wants you to use your real name so it knows you’re a real person; it wants our education information, our sexual orientation, our passions, our fears, sucking up data on everything that makes us human so it can use that data to sell ads.

Ultimately Pages will have to pay more for exposure, despite bending over backwards to whatever Facebook wants.

People are reportedly using Facebook less, so the company needs to make changes to bring users back into its clutches. The amount of personal updates we share is declining as folks turn to things like private chats or groups to engage with people who listen. The recent news feed tweak could lead to more sharing; if your personal posts appear higher in feeds, chances are engagement will go up too. And in our Like-hungry culture, engagement leads to more content, whether you’re a friend or a publisher.

You might notice difference in your feed, or perhaps none at all. But every Page, from mom and pop shops who are trying to maintain a small business through social reach to stalwart news organizations, will feel the changes ripple through social strategies and traffic from Facebook.

Each time Facebook changes how it displays content, it is yet another reminder of the power the social network has over the things we read and see. You can invest time and energy pouring content into the machine that is controlled by a company that might decide your content isn’t as important as someone else’s.

What can we expect from Facebook, really? While there are expectations of some privacy and security for Facebook’s users, Facebook is responsible only to itself. All our activity on Pages or news feeds just fuels the hungry beast that survives on information and must redistribute it in a way that best benefits Facebook.

If you’re upset with Facebook’s decision to focus more on friends, then look elsewhere for your news. Pop the filter bubbles Facebook helped to create, and seek information outside of the walled garden that controls content in an attempt to keep users placid and clicking on ads.

You can’t really blame Facebook for changes that benefit itself. Like people, Facebook does whatever is in its own best interests. And for now, that’s showing you more of your friends.