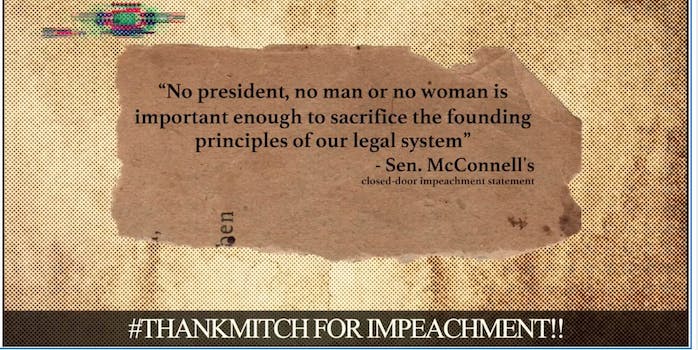 The ad is from someone who is running for governor in California to protest Facebook's political ads policy.

Facebook isn’t taking down an ad that falsely implies that Senate Majority Leader Mitch McConnell (R-Ky.) supports the impeachment of President Donald Trump, according to a new report.

BuzzFeed News reports that the ad was created by Adriel Hampton, who said in October that he was running in California’s gubernatorial election to shine a light on Facebook’s highly criticized political advertising policy.

The ad cuts together things that McConnell has said to make it seem like he is endorsing Trump’s impeachment. Throughout it all, it has #ThankMitchForImpeachment written underneath the clips.

Posted by Adriel Hampton for California Governor on Monday, December 16, 2019

Facebook’s political advertising policy, which essentially allows politicians to run ads even if they contain false information, has received scrutiny from lawmakers and even its own employees.

Hampton told CNN in October that he was running because he feared Trump could use Facebook’s policy “to manipulate the election very easily and that there is no one really challenging that.”

However, the ads being put up by Hampton—including the McConnell one—won’t be taken down unless a third-part fact-checker flags it, according to the report.