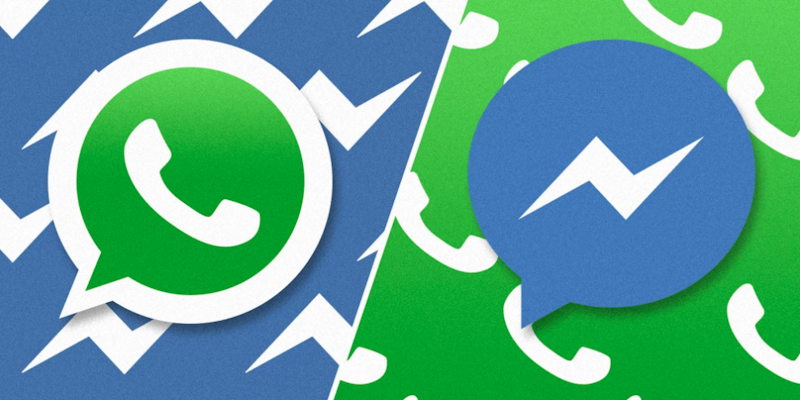 The pros and cons of Facebook Messenger and WhatsApp

Here's how the world's two leading messaging apps stack up against each other.

Chances are that you either have Facebook Messenger or WhatsApp on your phone. WhatsApp hit the 1 billion user mark earlier this year, and Facebook’s standalone messaging app is close behind with 900 million active monthly users. The two messaging apps process a combined 60 billion messages per day, according to figures Facebook CEO Mark Zuckerberg gave last month. For sake of comparison, that’s three times the number of SMS messages exchanged per day.

Both Facebook Messenger and WhatsApp have their individual strengths and weaknesses. If you have both apps downloaded on your phone, chances are you’re familiar with a few of them. You might even rely on Facebook Messenger or WhatsApp for different reasons.

When Facebook bought WhatsApp last year for an estimated $19 billion, Zuckerberg promised not to compromise with the “look and feel” of one of the world’s most popular messaging apps. While Messenger and WhatsApp perform virtually the same functions such as free VoIP calling and group messaging, the two messaging apps are distinct from each other in many key ways.

Here’s how Facebook Messenger and WhatsApp stack up against each other.

Use this code to verify end to end encryption chats with me on Whatsapp.
Thanks,
Seif pic.twitter.com/DrPEGYwsXC

Everything you send on WhatsApp is encrypted, which isn’t the case for Facebook Messenger. Last month, WhatsApp announced its latest version would have end-to-end encryption on all messages by default. This means that messages sent on WhatsApp are only viewable on the sender’s and recipient’s devices, and WhatsApp isn’t able to read them.

For now, WhatsApp is the go-to messaging app for private communications.

This level of encryption applies to all text, photo, video, files, and voice messages sent on WhatsApp. As long as you and the person you are messaging with have the latest version of WhatsApp downloaded, you can rest assured that your conversation is encrypted.

How do you make sure your conversations with a specific contact are encrypted on WhatsApp? Click on the “i” icon beside a contact’s name and scroll down to “Encryption.” If your contact has the latest version of WhatsApp downloaded with encryption enabled, it will display the following message:

“Messages you send to this chat and calls are secured with end-to-end encryption. Tap to verify.”

You can also tap on the lock icon and scan the QR code or compare the 60-digit string of numbers to manually verify your friend’s messages are encrypted. 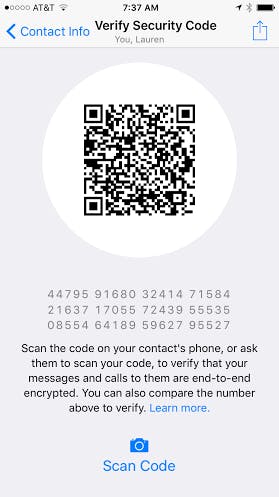 Facebook has yet to offer end-to-end encryption for either Facebook Messenger or Instagram, but that may soon change. Rumors of a new “disappearing messages” feature in the style of Snapchat surfaced recently on Twitter. Such a feature would allow users to place a time limit on how long messages are visible for on Facebook Messenger, forcing them to “self-destruct” after the allotted time is over.

It’s likely the encryption feature will be included in a future update of Facebook Messenger. For now, WhatsApp is the go-to messaging app for private communications.

There’s one potential privacy snafu for iPhone users who may have their WhatsApp chat histories backed up to their iCloud accounts.

@csoghoian Here’s the flaw, the average user will enable this – putting the other side at risk pic.twitter.com/3qU8vNbfIo

If either you or the person you’re chatting with has this feature enabled on their iPhones, Apple will have access to your chat histories through iCloud. In short, it would defeat the purpose of WhatsApp’s end-to-end encryption. 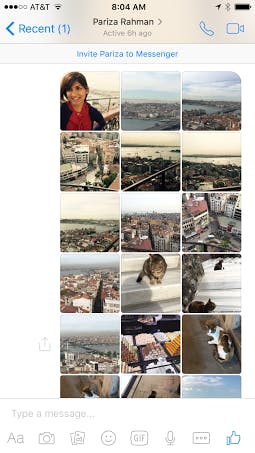 Both Facebook Messenger and WhatsApp allows users to send photos and videos. Both apps allow you to use footage from your camera roll, capture something on the spot, or send photos from Instagram or other photo apps. Both Facebook Messenger and WhatsApp allow you to share photos you receive on the app directly on your Facebook profile. And with both messaging apps, users must take the added step of saving photos to their camera roll or enabling a tool like Airdrop to share their photos.

Unlike Facebook Messenger, WhatsApp has a limit of 10 photos per message. If you have a huge collection of trip photos you want to send your mom in one go, this may be a slight inconvenience. Your recipient won’t be overwhelmed by an extra-large delivery of photos on Facebook Messenger either; the app neatly shrinks and organizes photos into rows and columns.

Facebook Messenger’s other advantage over WhatsApp for photos is its natural integration with Facebook. With Photo Magic, the app deploys facial recognition technology to recognize your friends in each photo you send and give you the option to create a group thread. Especially useful during group trips, weddings, or family reunions, this feature on Facebook Messenger is likely to save you a lot of time. 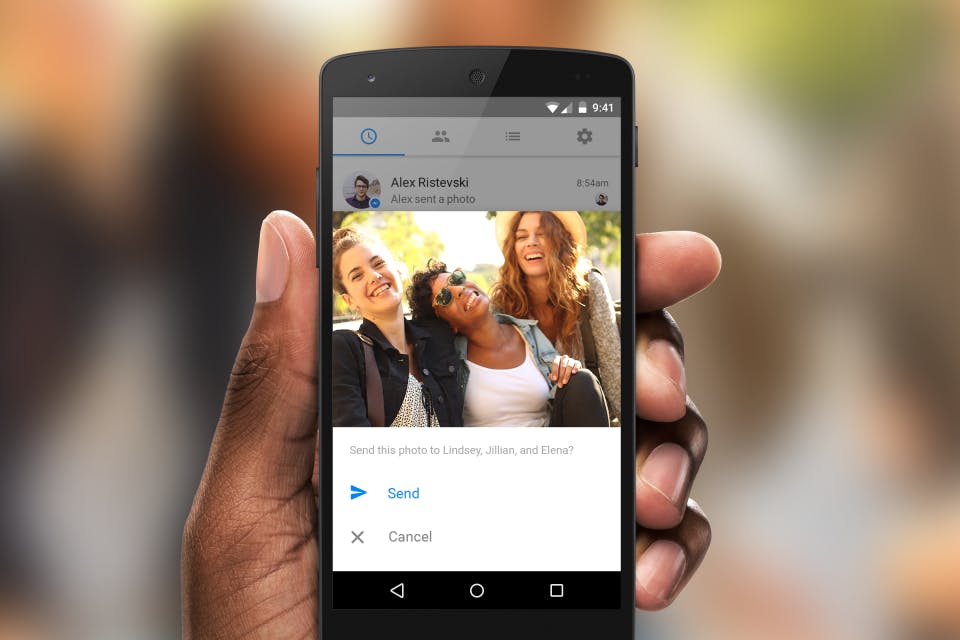 Facebook Messenger has more advanced photo editing features than WhatsApp, similar to the tools already offered on Facebook itself. You can add text, filters, stickers and other add-ons on the photos you send through Facebook Messenger.

Whatsapp calls are the best thing ever. I just called my best friend from Kenya! I’m so happy to hear his voice again…

Every so often, you need to pick up the phone and have an actual conversation. Both Facebook Messenger and WhatsApp offer free VoIP calling through its interface. You’ll only need a Wi-Fi signal. If you don’t have an unlimited data plan and need to save a few bucks, or want to give a new acquaintance a quick call, this feature can be a godsend.

But if you’re in need of a messaging app that doubles as a way to make calls while traveling abroad, WhatsApp is the way to go. A huge reason why WhatsApp has become so popular is its ability to work smoothly across a wide range of countries, devices, and signal strengths. WhatsApp’s popularity in parts of the developing world, as well as Europe and Asia, is due to its ability to work smoothly on 3G, Wi-Fi, and even 2G networks. Do you need to reach your Peace Corps volunteer sister in a Botswana Internet cafe? While both Facebook Messenger and WhatsApp will work abroad, you may find that calls on WhatsApp work better in developing countries or rural areas.

If you’re in need of a messaging app that doubles as a way to make calls while traveling abroad, WhatsApp is the way to go.

What if you need to coordinate your best friend’s bachelor party and need to reach all eight groomsmen? Or what if you want to figure out a good schedule for your new study group to meet? Facebook Messenger allows you to place group calls for up to 50 people.

If you hate being on hold with a customer service agent, messaging them on Facebook may be a promising new alternative. Facebook last month unveiled a new way for customers to get in touch with businesses through bots on Facebook Messenger. Companies and public entities are finding more and more creative ways to get in touch with customers on the platform. You can now get health advice, flight status updates, and even book a hotel room or order flowers. Some airlines will even send you your boarding pass by Facebook Messenger. 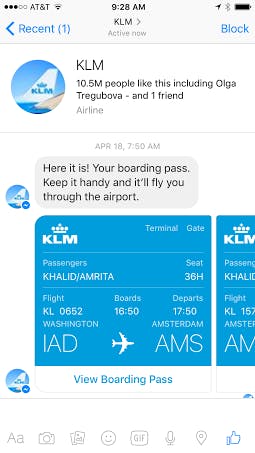 Get more weird internet in your ears. Introducing 2 GIRLS 1 PODCAST: