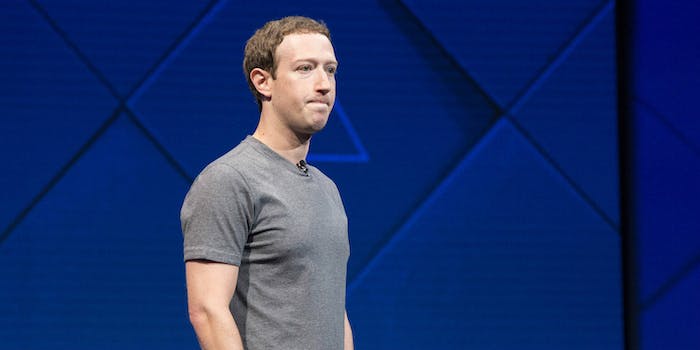 According to a new report, Facebook and Google actively aided these campaigns.

Facebook and Google reportedly helped spread anti-refugee campaigns in swing states ahead of the 2016 presidential election, according to a report from Bloomberg.

The report claims the tech giants directly collaborated with the far-right group Secure America Now to help it more effectively reach its intended audience. Faux tourism ads viewed millions of times showed France and Germany being overrun by Sharia law. One video depicts French students being trained to fight for the caliphate and the Mona Lisa wrapped in a burka. “Under Sharia Law, you can enjoy everything the Islamic State of France has to offer, as long as you follow the rules,” a narrator says.

Others linked Democratic Senate candidates with terrorists, “STOP SUPPORT OF TERRORISM. VOTE AGAINST CATHERINE CORTEZ MASTO,” one ad stated. “YOU SAW THE THREAT. NOW VOTE TO PROTECT NEVADA,” another read.

According to the report, the two companies competed with each other to win “millions in ad dollars” and worked closely with the conservative non-profit to spread its campaigns, which included a mix of anti-Hillary Clinton videos and anti-Islam ads.

Google and Facebook recently divulged that it unknowingly sold ads to Russia-linked agents during the 2016 presidential election. This differs in that both companies are said to have directly collaborated with Secure America Now to help it reach a wide number of users. Facebook reportedly even worked with the conservative group to do A/B testing on new technology. Bloomberg reports: “The video they used was ‘Are We Safe?’, which contrasts colorful scenes of Main Street America with black-and-white pictures of Muslims who have carried out attacks in the US. Facebook tested 12 different versions of the video.”

The ads targeted voters in swing states like Nevada and North Carolina and made an employee of Harris Media, the Austin-based company that created the ads, feel uneasy. “It was designed to strike fear in people’s hearts,” a spokesperson told Bloomberg. Harris Media previously worked with Facebook to help the far right, anti-immigrant Alternative for Germany (AfD) party secure seats in parliament earlier this year.

A Google spokesperson told Bloomberg it eventually blocked ads from Secure America Now for violating policy, including the fake tourism videos, but did not clarify when.