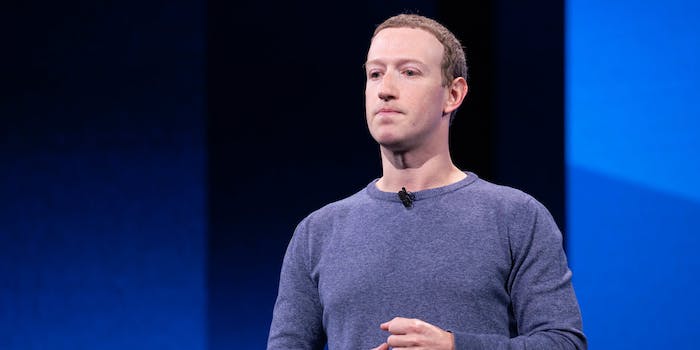 Some lawmakers have been calling for ban on mergers during the pandemic.

Facebook’s announcement last week that it was acquiring Giphy, the popular GIF repository—and a potential deal between Uber and GrubHub—is drawing criticism from several members of Congress.

The two deals come as several lawmakers have pushed bills that would ban mergers during the coronavirus pandemic.

Facebook announced on Friday it was acquiring Giphy in a deal that would reportedly be for $400 million. Meanwhile, reports say Uber has talked with GrubHub about merging.

Last month Sen. Elizabeth Warren (D-Mass.) and Rep. Alexandria Ocasio-Cortez (D-N.Y.) unveiled a bill that would stop mergers and acquisitions by large companies during the pandemic. The “Pandemic-Anti Monopoly Act” specifically applied to businesses with more than $100 million in revenue or firms that have a market capitalization of more than $100 million.

In a statement to the Daily Dot, a spokesperson for Warren—who was critical of tech giants during her 2020 presidential run—said Facebook’s acquisition of Giphy was “yet another example of a giant company using the pandemic to further consolidate power.”

“This time it’s a company with a history of privacy violations gaining more control over online communications,” the spokesperson said. “We need Senator Warren’s plan for a moratorium on large mergers during this crisis, and we need enforcers who will break up Big Tech.”

Sen. Josh Hawley (D-Mo.), another frequent critic of big tech, told the Verge that the deal showed how Facebook “keeps looking for even more ways to take our data.”

“Many companies, including some of Facebook’s rivals, rely on Giphy’s library of sharable content and other services, so I am very concerned about this proposed acquisition,” Klobuchar said in a statement to Axios.

Meanwhile, earlier this month, a group of Democrats in the House of Representatives asked for a provision in the next coronavirus relief bill to stop corporate mergers that don’t include severely distressed companies. The HEROES Act, which passed in the House, does not include any language about blocking mergers.

The anti-trust fervor in Congress extends further than just Facebook’s acquisition of Giphy. Several lawmakers also criticized reports of a possible merger between Uber and GrubHub.

The two companies have discussed a potential merger over the weekend, according to the Street, which also prompted criticism from lawmakers.

“If Uber takes over Grubhub it isn’t good for competition and it isn’t good for you,” Klobuchar tweeted on Sunday. “When big companies corner the market it usually means more for them and less for you, especially in a pandemic. That’s why I’m challenging the Trump antitrust enforcers to do something about it.”

The Minnesota senator added in a follow up tweet that the potential merger was “a pandemic-driven $6 bil deal to take out major competitor of UberEats & allow Uber to control more than 1/2 the delivery market.”

Warren was also critical of the potential Uber and GrubHub deal, and used it to promote her bill with Ocasio-Cortez.

“We can’t allow companies to use this crisis to boost their profits and consolidate their power while crushing workers who are already struggling to make ends meet. Rep. @AOC and I are calling for a moratorium on big mergers and Congress should pass it,” Warren tweeted last week.