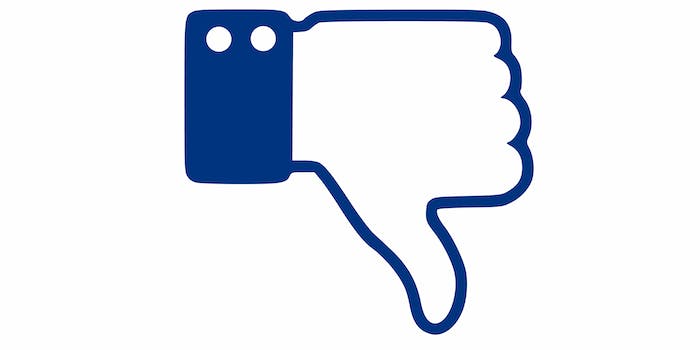 In February, Facebook started testing a Reddit-style downvote button to improve the quality of conversations on the platform. Now, the social network is expanding the feature to users outside of the U.S.

The company told CNET it’s running a “small test” in Australia and New Zealand, giving users the ability to upvote or downvote comments by selecting arrow icons. The goal is to create spaces with more constructive dialogue by showing the highest ranked comments rather than those written to elicit a reaction. When selected, the downvoted comment will vanish and additional reporting options, like “Offensive,” “Misleading,” and “Off Topic,” will appear.

This way, Facebook can filter out comments that may violate its guidelines and take action against them. This is all part of a continued campaign to clean up the site and reduce damage to the beleaguered platform’s reputation. It comes just weeks after the Cambridge Analytica scandal, which put a spotlight on its failures to police its site of fake news, abuse, and clickbait.

There have been mixed reactions about the feature on social media.

Hmmmm. Not sure I like the Upvote and Downvote feature of Facebook. Time will tell I guess. pic.twitter.com/hxvjW7HaTX

It’s an idea taken from Reddit. But it won’t work the way the thinknit will.
All it takes is some hateful groups tonon mass downvote good and upvate bad. Reddit has mods to help monitor that. Facebook does not.

Facebook emphasized that the small down arrow on a comment isn’t a dislike button, a feature users have requested for years. Instead, it sees the downvote as a method for gaining feedback about comments on public page posts. Facebook wants users to flag “bad comments” which it says have “bad intentions or [are] disrespectful.” It’s important to note, the downvote button only appears on comments, not posts.

“We didn’t want to just build a Dislike button because we don’t want to turn Facebook into a forum where people are voting up or down on people’s posts. That doesn’t seem like the kind of community we want to create,” CEO Mark Zuckerberg said in 2015.

Facebook didn’t create this feature based on user feedback, rather, it wants to employ people to improve the site. That’s easier said than done, as there’s nothing stopping users from using this Reddit knock-off as a dislike button to troll comments.