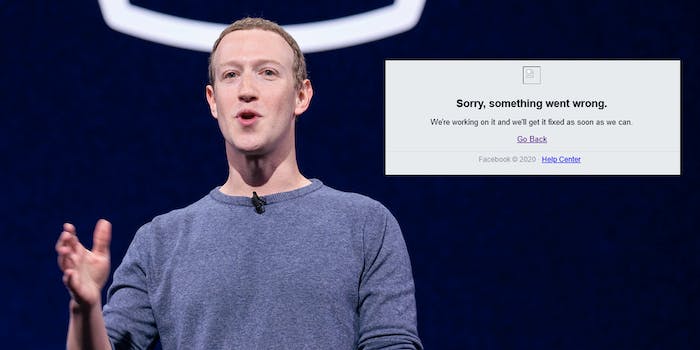 Update 4:45pm CT: It appears that some Facebook services are slowly coming back online.

Down Detector, which crowdsources people who indicate problems on websites, shows a spike in people reporting Instagram, Facebook, and WhatsApp being down starting around 11:00am CT.

A message on Facebook’s website reads: “Sorry, something went wrong. We’re working on it and we’ll get it fixed as soon as we can.” Users can still open Instagram, but the app will not refresh feeds. The outage is also affecting Oculus, the company’s virtual reality platform.

The sites and apps being down come around the same time as a whistleblower coming forward and providing documents that she says show that the company, which owns all three, is aware of harm it causes. The company has faced intense criticism since the Wall Street Journal ran a series of stories, including one that said Facebook’s internal research found that Instagram had a negative impact on the mental health of teenagers.

In a statement posted on Twitter, the social media giant acknowledged the outages.

“We’re aware that some people are having trouble accessing our apps and products. We’re working to get things back to normal as quickly as possible, and we apologize for any inconvenience,” Facebook wrote in the tweet.

The Daily Dot has reached out to both Facebook and Instagram about the outages but did not immediately receive replies. We’ll update this story if we hear back.

The outage also is affecting the company’s internal tools and communications, according to the New York Times’ Ryan Mac.

Numerous people online have noted that the issue appears to be DNS-related. According to cybersecurity analyst Brian Krebs, the DNS records for Facebook and its related apps were withdrawn this morning, meaning traffic cannot be routed to the sites. It’s unknown how or why they were withdrawn.

This story is developing. Check back for updates.