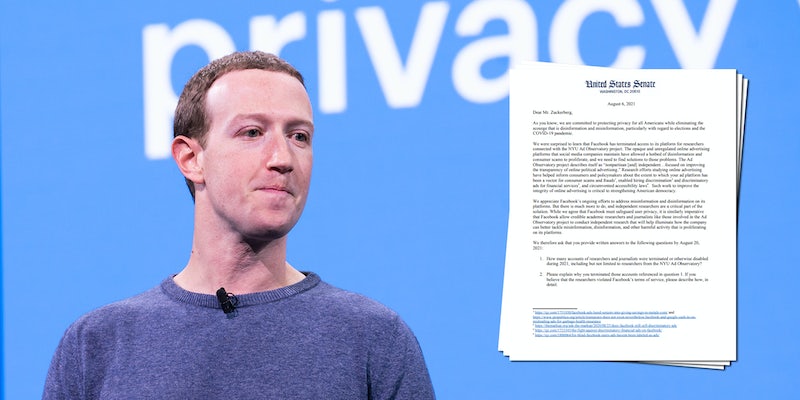 The senators said they were 'surprised' by Facebook's decision to suspend the accounts.

A group of Democratic senators are asking Facebook for more answers surrounding its decision to suspend the accounts of researchers who were analyzing the social media giant’s political ads and misinformation.

Sen. Amy Klobuchar (D-Minn.), Sen. Chris Coons (D-Del.), and Sen. Mark Warner (D-Va.) sent a letter to Facebook CEO Mark Zuckerberg on Monday urging him to answer a number of questions about the company’s controversial decision to suspend accounts of the New York University Ad Observatory, a research project by Cybersecurity for Democracy.

Facebook has long had issues with the researchers, claiming that the project violated their terms of service. Last week when the company announced that the researchers had been suspended, Facebook’s Product Management Director Mike Clark said there was “ongoing and continued violations of protections against scraping,” including that the browser extension collected information about users “who did not install it or consent to the collection.”

However, it was quickly pointed out that those users who did not “consent to the collection” appeared to be advertisers’ accounts, not private users.

Facebook also said it took actions to “stop unauthorized scraping” because of a 2020 Federal Trade Commission (FTC) order. But the FTC shot back at that characterization last week in a letter, saying: “The FTC is committed to protecting the privacy of people, and efforts to shield targeted advertising practices from scrutiny run counter to that mission.”

The company walked back from its assertion about the FTC order.

Amid all of this, the Democratic senators are looking for more answers.

Klobuchar, Coons, and Warner said they were “surprised” to learn of the NYT Ad Observatory suspensions.

“While we agree that Facebook must safeguard user privacy, it is similarly imperative that Facebook allow credible academic researchers and journalists like those involved in the Ad Observatory project to conduct independent research that will help illuminate how the company
can better tackle misinformation, disinformation, and other harmful activity that is proliferating on its platforms,” the senators wrote.

Specifically, they asked Facebook to respond to a number of questions including: how many researchers and journalists had accounts disabled this year and if they were, what policy did they violate; how the Ad Observatory “comprised people’s privacy;” and whether or not data collected on users who did not “consent to the collection” were advertisers and not private users; among many other things.

The three senators asked for Facebook to provide them answers by Aug. 20.