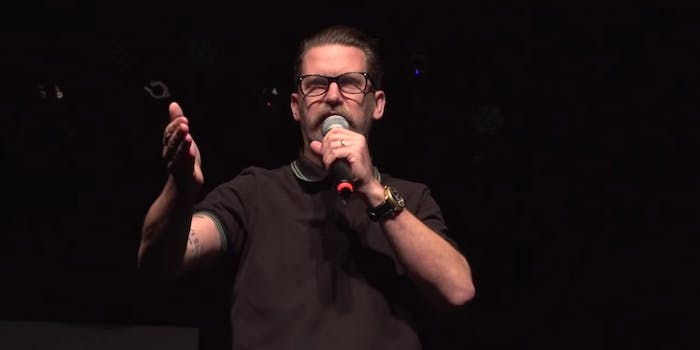 Facebook kicks out the Proud Boys and founder Gavin McInnes

The platform promised it will continue taking action against 'hate speech' and 'hate organizations.'

Nearly three months after Facebook banned InfoWars and Alex Jones, another white nationalist organization is getting the boot. Facebook has banned multiple pages and groups connected to Gavin McInnes’ far-right Proud Boys organization on both Facebook and Instagram, citing concerns over “hate speech” from a “hate organization.”

McInnes, who co-founded Vice in 1994, was removed from both Facebook and Instagram as part of the recent ban wave. Facebook has since publicly commented on the crackdown, stressing that the Proud Boys “violate our policies.”

McInnes founded the Proud Boys during the 2016 presidential election, and the organization’s members consider themselves “western chauvnists” who proudly espouse “anti-political correctness” and “anti-white guilt,” according to the Southern Poverty Law Center. The SPLC designates the Proud Boys as a hate group and stresses that its leaders “regularly spout white nationalist memes” while members embrace “anti-Muslim and misogynistic rhetoric.”

The Proud Boys are connected to myriad violent incidents over the past two years, including the violent Charlottesville Unite the Right rally, which was created by white supremacist and former Proud Boy Jason Kessler. This past month alone, violence broke out in New York City after McInnes spoke at the Metropolitan Republican Club in Manhattan. Proud Boys members swarmed anti-fascist activists protesting the event, leading to multiple arrests.

More recently, a mass shooting at a conservative Jewish synagogue in Pittsburgh was carried out by a Proud Boys supporter who bemoaned charges brought against Proud Boys participating in the New York brawl.

In August, Twitter suspended McInnes and the “@ProudBoyUSA” account. McInnes stressed at the time that the ban “will have zero effect on my reach or on the Proud Boys,” but with the latest Facebook and Instagram ban, that claim seems more unlikely than ever before.