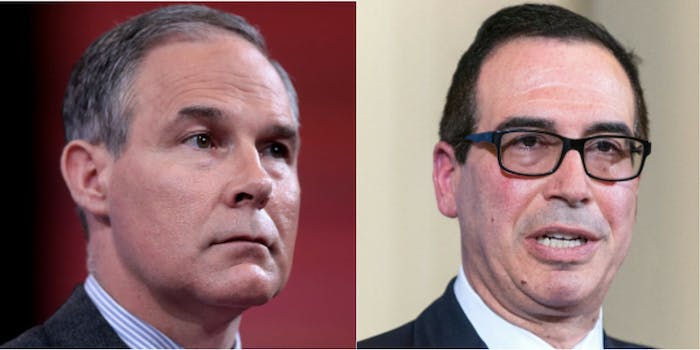 Here are the most extravagant expenditures by the Trump administration

Many Americans have been so busy amateur sleuthing their way through the intrigue surrounding President Donald Trump and Russia that they haven’t taken a moment to appreciate the financial abuses being perpetrated in their own backyard. Housing and Urban Development Secretary Ben Carson has taken a lot of heat for his decision to purchase a $31,000 dining set for his office, but Carson is by no means the only Trump appointee who is getting his nose wet while cutting as many government programs as possible.

As a number of commentators have written, we are in the midst of a second Gilded Age, and what would such an era be without some outrageous graft? From taxpayer-funded trips to Europe to private air travel to a soundproof booth, there have been a slew of unreasonable expenses from Trump’s cabinet so far, running the gamut from eyebrow-raising to simply infuriating.

This week, it came out that Ben Carson and his wife were personally involved in selecting a $30,000 dining set for use in his HUD office. This contradicts initial reports that he was not involved in choosing the pricey dining set. Federal law prohibits the purchase of office furniture that costs more than $5,000 without congressional approval. Considering HUD has a mandate of assisting low-income folks with affordable housing, this approaches Marie Antoinette levels of irony.

Emails released last week not only showed that Carson and his wife selected the furniture, but also that aides communicated via email about how to obtain the dining set, despite its clear violation of ethics laws. It was also reported that when Mrs. Carson was made aware of these rules, she demanded that staffers “find the money” for the furniture she wanted.

To paraphrase Antoinette, “Let them use IKEA plates.”

Last fall, Scott Pruitt ordered the installation of a soundproof booth in his office. First of all, that is the kind of very normal and not at all suspicious request you make when you definitely aren’t working out sweetheart deals with oil and gas companies. Second of all, the Washington Post reported that not only did the booth itself cost tens of thousands of dollars, but merely removing a closed-circuit television system to make way for the soundproof booth cost $8,000.

When the Post first reported on the booth, the EPA said that Pruitt needed a secure communications area in his office to speak confidentially with the administration. Yes, it would be terrible if people found about about all of those secret plans to protect the environment that Trump’s cronies are cooking up.

As we will get into, a number of Trump cabinet officials don’t seem to know about Expedia or Priceline. In fact, while many cabinet members in previous administrations have chosen to fly coach or business class, Trump’s cabinet tends to opt for first class, charter, or private jet travel, regardless of the cost. Shout out to Betsy DeVos, though. She already has her own private jet.

As he proposes massive cuts to his Interior Department, Ryan Zinke has racked up a truly impressive bill for flights to the various national parks and monuments he hopes to someday open up to drilling. When he has been criticized for his spending habits, Zinke has been totally unapologetic, dismissing criticism as “innuendo.”

Of all of the various departments in the cabinet, the head of the VA might have the most difficult time justifying an expensive taxpayer-funded, international trip. This is especially true when you consider that he and his wife traveled to Britain and Denmark, which aren’t exactly active war zones. And yet, that’s exactly what David Shulkin tried to do.

Shulkin had a member of his staff doctor an email to make it look like he was receiving an award from the Danish government, which then allowed him to justify billing taxpayers for travel and accepting an unauthorized gift of tickets to Wimbledon.

It didn’t stop there. Of course, Shulkin had to travel with a small security detail and several other VA officials. Expenses turned in by staffers on the trip include a “$3,825 overpayment for airport parking and a $2,718 overpayment for lodging.” Shulkin even ordered the creation of a special “trip book,” something between a schedule and a keepsake which cost $1,500. Very cute.

These expenses add up. The trip cost a total of $122,000 and watchdogs could not find a discernible motive for the trip that could anyway be connected to government business.

Even though it seems that wasting taxpayer money has become a pastime among Trump administration officials, only one cabinet member has actually had to step down as a result of these financial abuses.

Tom Price resigned last fall as the head of the HHS after it was revealed that he was spending tens of thousands of dollars on charter flights due to his distaste for flying commercial. Additionally, when traveling abroad to Africa, Asia, and Europe, Price used military planes, which added another $500,000 to his tab.

But, hey, at least he didn’t have to be around all of those sick people that will lose insurance thanks to his policies. Gross.

Treasury Secretary and Goldman Sachs alum Steve Mnuchin also likes to take military planes in lieu of being forced to rub elbows with the common man. Unlike Price, an ethics investigation somehow absolved him of any wrongdoing for taking military flights to such exotic locales as West Virginia.

The most outrageous of his trips was one in which Mnuchin and his wife took a Bond-villain like trip so that they could take in the view of the solar eclipse from the top of Fort Knox. Mnuchin also tried to secure military travel for his honeymoon, but that request, unlike so many others, was denied.

While we might not get another resignation from Trump’s cabinet due to profligate spending, the American taxpayer can sleep well knowing that at least their government overlords don’t have to fly coach