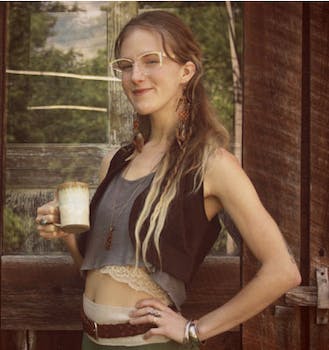 RunWithTheTribe's handmade “gypsy” clothing and feathered “warrior headdresses” have prompted a serious discussion on Etsy about the selling and marketing of cultural goods.

The reason many Etsy community members have taken offense? The shop is managed by Alana Rose Abbott, a Caucasian woman from Ithaca, New York.

“SO. MUCH. CULTURAL. APPROPRIATION,” harvestxvx commented. “Also, FYI—‘Gypsy’ is a racial slur.”

“I am the third generation of my family to live in the United States. My paternal side comes from Syria (and further traced back to Africa) & the former Yugoslavia. My maternal side is Italian and French (the French side moved to Canada & we have traced Native American ancestry to our blood line)… I also live and was born on land rich with Native American history. So what does this prove?… I am a citizen of this planet.”

Jumping off of Abbott’s comment, sellers began a dialogue in the forums about identifying cultural appropriation and when cultural items are and are not OK.

“Uh oh… I just listed a bunch of new items and in one or two of my tags for big hoop earrings I think I may have used the word gypsy,” ElfinWorks wrote. “I had not realized anyone might take offense at that.”

Another user, Maggie, said she worried about using accurate but offensive terms for vintage clothing.

“The Squaw Dress was very popular in the 1950s and beyond,” she said. “Since that’s the term they were originally marketed under, it’s a term buyers use to look for them, but many of us feel uneasy about perpetuating any use of the word. On the other hand, they’re pretty dresses and how else do you get yours seen? It’s a dilemma with no easy answer.”

Some community members thought it was alright to create and sell cultural items as long as sellers adhered to federal regulations, such as the proper labeling of Native American items.

“I think artistically you can honor other cultures and styles” Angel Luna wrote. “The quest is to create work that is also unique and has your personal voice to it.”

Satanica Batcakes suggested the community read “Cultural Etiquette: A Guide for the Well-intentioned,” an essay by Amoja Three-Rivers. She quoted it in the thread:

“Don’t just learn the fun and exciting things about us and then go home to your safe, isolated, white, privileged life. Learn about the history of the people whose culture you’re dabbling in. Learn how our history relates to your own, how your privilege connects and contributes to our oppression and exploitation. And most importantly, make it a fair exchange—give something back.”

It’s doubtful that the conversation will cut down on the tens of thousands of “tribal” goods sold on Etsy. But it just might serve to make sellers more mindful of cultures around the world.