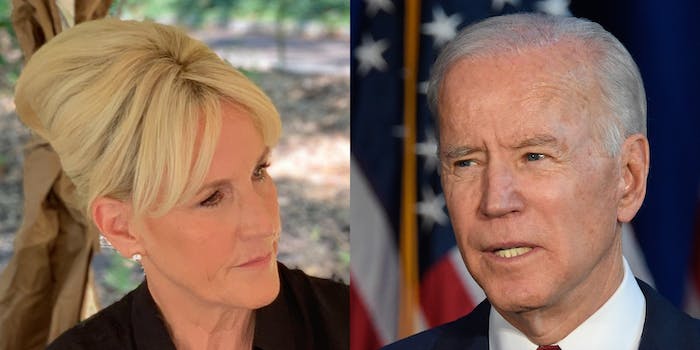 Erin Brokovich calls out Joe Biden over his EPA choices

She had harsh words for the incoming president.

Famous environmental campaigner Erin Brokovich wrote an op-ed in the Guardian calling Joe Biden out over his appointment of Michal McCabe to his transition team for the Environmental Protection Agency. McCabe is the former Deputy Director of the EPA, a former employee of Biden, and a former advisor to the chemical company DuPont, who helped them avoid responsibility for the chemical PFOA and the damage it did to plant workers, locals residents, and their children. It was depicted in the movie Dark Water.

DuPont had known the chemical was dangerous since 1961, and thoroughly explored the extent of that danger at their in-house toxicology research facility. However, DuPont chose not to disclose any of this to the public or to the majority of their workforce, publicly declaring PFOA harmless. DuPont went on to dispose of waste PFOA in or near water sources, first buried in barrels on the banks of the Ohio River and dumped into the ocean and later poured directly into the Ohio River. By 1984 there were elevated levels of PFOA in the water supply as far as 79 miles away from the plant. As a result, multiple cancers, ulcerative colitis, and birth defects proliferated.

In 2001 McCabe went from working for the EPA to working for DuPont, and in 2003 he took over handling communications between the two after the EPA began a priority review of PFOA. The purpose of a priority review is to determine if a substance is toxic enough that it needs to be subject to regulations limiting its use and dictating safe methods of disposal, something that would have been expensive and inconvenient for DuPont.

McCabe used his close working relationship with his former colleagues at the EPA to access inside information about the investigation, information which allowed DuPont to influence the outcome of the investigation in a way that benefitted them immensely. No regulatory laws were applied to the use or disposal of PFOA, the only requirement was that they phase out its use in their products over a nine-year period. Though the EPA was able to fine DuPont in 2006 for the withholding of information about PFOA’s safety concerns, that fine was quite low.

Online, the internet cheered Brokovich calling out the corporate ties of Biden’s transition. Most of the reactions to McCabe’s appointment are furious, with some already comparing Biden’s new administration to Trump’s.

In her op-ed, Brokovich states that this isn’t a left -or right-wing issue, it’s a listen-to-science issue. She called on Biden to listen to the communities he’s been elected to serve and not corporate boards.

It is time to keep your promise and give the people a voice and a seat the table in order to find a meaningful solution for the environment and for the people. Don’t close the door on us again.

Brokovich finished by calling on Joe Biden to “do the right thing.” Biden has yet to make any public response. Biden’s ties to DuPont might be stronger, however. He once lived in a mansion that carried the company’s name.