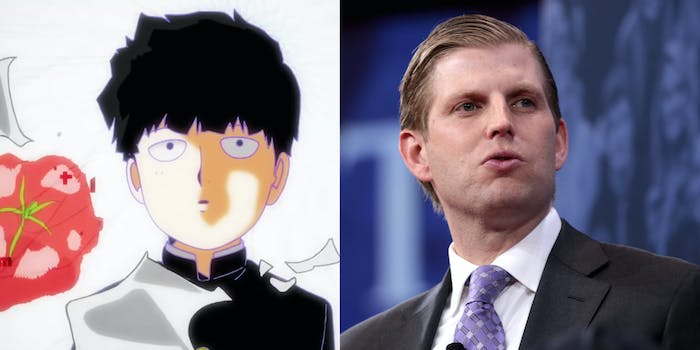 Trump tried to implicate ‘Mob Psycho 100’ in a Google conspiracy theory on Tuesday.

Eric Trump accused Google of “trying to manipulate Americans” because of the images it features when searching “mob,” and he implicated Mob Psycho 100 in the bizarre conspiracy theory.

“Google is once again trying to manipulate Americans. Type ‘mob’ or ‘mobs’ into google and watch what comes up. Do the same on any other search engine,” he tweeted on Tuesday.

Trump not only topped his tweet off with a “#NothingToSeeHere” hashtag, but he also included screenshots of what different search engines feature when searching the word “mob.”

The post led Mob Psycho 100 to become a top trending topic on Twitter. Mob stans are taking the opportunity to promote the show via fancams and GIFs, while others are simply mocking Trump for seemingly “not understanding how Google works.”

As Comicbook notes, the real reason the show is ranked high on Google is probably because of its popularity and that it’s often referred to as “Mob,” not because it’s part of some Google conspiracy.