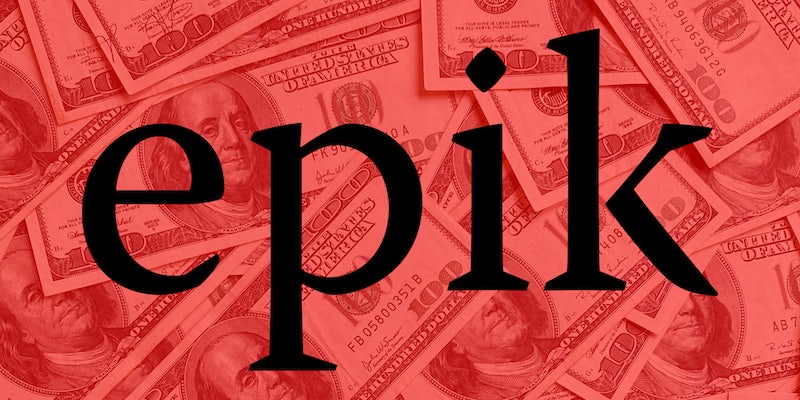 Its new CEO promises things will be under control soon.

For several weeks, users on NamePros, an online community for domain name investors, have been up in arms about their inability to withdraw funds from Masterbucks. Masterbucks is a payment platform operated by Epik, the controversial domain name provider and web host whose customers include social media sites like Parler and Gab as well as far-right forum TheDonald. Epik’s new CEO Brian Royce says he has big aspirations for the company and wants to see it become a competitor to PayPal and CashApp. But with only two months on the job, it’s been a rocky start.

The earliest post complaining of withdrawal troubles dates back to Sept. 8, just six days after Royce’s appointment to CEO was announced. The real avalanche of complaints started with a post on Sept, 20.

“It happened on 23 Aug 2022 and this matter lasted almost one month without any process,” the user wrote. “Masterbucks.com declined my fund withdrawal and disabled the button of fund withdrawal….What is wrong with Epik.com?”

Other uses quickly began venting similar frustrations in the same thread. Nine days later, Domain Name Wire reported that Royce said the company had taken Masterbucks offline for maintenance and would be back online on Oct. 10. That deadline was missed, new terms of service and fees were added, and frustrated NamePros users continued to pile on the thread. At the time of this writing, the thread has over 2,620 replies and several users complained they still haven’t seen their funds. Meanwhile, Epik has been pummeled with one-star ratings on Trustpilot, a review site, most of which complain about their inability to access funds.

The funds held up are from transactions users make on Epik’s platform, which includes a domain marketplace and escrow services. Users can use Masterbucks funds to pay hosting fees and make transactions on the Epik platform. The Masterbucks website pitches itself as a “convenient withdrawal dashboard” with several transfer options. But for the past two months, transferring their funds has been anything but convenient for many Masterbucks users.

While it’s difficult to estimate the total scope of how much money is currently in limbo in Masterbucks, several users shared screenshots of their accounts with the Daily Dot showing pending withdrawals. One user who made a withdrawal request on Oct. 14 still has more than $50,000 tied up in the platform.

This isn’t the first time Epik has been embroiled in scandal. Last year, Epik faced another uproar after a massive data breach revealed the identities and personal information of many users.

In an interview with the Daily Dot, Royce repeatedly emphasized that customers would be paid what they’re owed, but that it would take time. “We are diligently working on all of these issues,” Royce said. “We will have everybody paid out in turn as quickly as humanly possible, while dealing with regulatory banking and compliance issues.”

Royce described the state of accounting in colorfully critical terms that he later requested not be published verbatim. It seems he walked into a bit of a clusterfuck at Epik, which was operating the Masterbucks platform without meeting regulatory “Know Your Customer” (KYC) requirements that allow banks and other financial institutions to confirm the identity of the organizations and individuals they do business with and ensure those entities are acting legally.

This is particularly important for Masterbucks, which offers direct payment, wire transfers, and PayPal transfers—all of which have specific KYC requirements.

“We belong to a club, right?” Royce said. “The United States of America is our club. And if we live here, we’re members, even if we don’t want to be per se. But we are, and they got rules and they got regulations and they got these crazy guys called IRS agents.”

The way Royce tells it, regulatory issues “sprung up” and he was brought in as CEO at Epik to get the company into compliance before things went from bad to worse. It’s unclear exactly when Epik found itself in this regulatory bind, but Royce says he’s been given “effectively three months” to correct software issues, accounting issues, and jump through regulatory hoops to ensure that Masterbucks is licensed properly and is operating more like a bank.

“We’re not a bank, to be very clear,” Royce said. “But that’s the direction we’re going in. We want to be a legitimate competitor to PayPal. And we are having to get all the necessary things done as quickly as possible while obviously still serving our clients.”

Verified clients on NamePros have complained of unresponsive customer service, software bugs, lack of updates from leadership, and most frustratingly, an ongoing inability to withdraw funds. The TruthPilot reviews are equally brutal, some claiming they have six figures in funds tied up in the Masterbucks platform. Some have begun to openly speculate about potential financial impropriety underlying the troubles with Masterbucks. Several users reached out to the Daily Dot and shared screenshots of their pending transactions.

Royce may have his work cut out for him given Epik’s recent history and problems.

In September 2021, Epik faced a massive data breach. A critical security flaw had been exploited by the hacktivist collective Anonymous, who then stole and dumped a large trove of data from the company. As a result of the leak, several far-right website owners were unmasked. After several days of radio silence, Epik founder and former CEO Rob Monster held a bizarre online “prayer meeting” where he described to an audience of journalists and hackers the root of the problem with the Epik security breach: shitty Russian code.

“We bought some shitty Russian code and we actually didn’t really have an opportunity to evaluate that code until we finished, until we really took control over everything,” Monster said.

Royce told the Daily Dot that he wants to do things differently from an operational perspective. While Monster probably didn’t know good code from bad, Royce is a trained computer engineer and said one of the first major updates he made as CEO was regarding security on the platform. Perhaps he will change how things work at Epik. But despite these differences, Royce aligns with Monster’s free-speech absolutist stances that have made his platform so controversial.

“Epik will continue to stand for free speech. It is extremely important to me to see core values of freedom, truth, and liberty reflected in all we do at Epik,” Royce said in a press release when he started. “I am concerned about free speech as I look at what is happening across America. People are actively trying to silence people like Joe Rogan, Dave Chappelle, and Chris Rock just for talking and telling jokes.”

During a podcast published by Domain Name Wire on Oct. 24, Royce said that he likes Alex Jones, who is currently facing more than a billion dollars in legal judgments for his defamatory statements regarding the Sandy Hook Massacre. “Say what you will about Alex Jones,” Royce said. “I personally like the guy. I’ve met him numerous times.”

In that same podcast, Royce was asked about escrow funds and whether they were kept separate from operational funds at Epik. Royce said that when he took over as CEO of Epik, “there was kind of a lot of commingling and the separation of operations wasn’t there.”

An escrow account is an account that is designed to hold funds temporarily in safekeeping for a client. Commingling escrow funds and operational funds not only poses regulatory problems but potentially liquidity problems if too many clients try to withdraw funds at the same time.

Royce told Daily Dot he didn’t want to comment on the accounting practices of the past leadership under Monster, who is now serving in a non-executive function as chairman of the board. When asked directly about the statements regarding commingled funds, he responded obliquely.

“To be very clear on that, anyone that did business through Masterbucks will be paid in turn,” Royce said. “Any transactions that happened once I took the reins, those are all sacrosanct and I can speak to those very carefully and say there’s no problems with those. But previous transactions before I took over this position, we’re still figuring those out. I’ve got to be honest.”