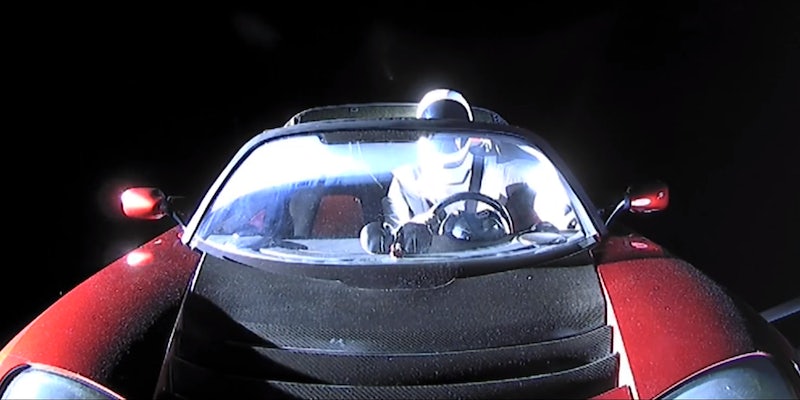 'There's a starman waiting in the sky.'

We’ve lost contact with Starman, Elon Musk’s epic interstellar joke, and one of the few manmade objects launched into our solar system. Fortunately, before the livestream of the Tesla-driving mannequin cut out, we got one last look.

Elon Musk posted a final selfie of Starman as it heads on its billion-year journey around the sun. The perfectly composed shot shows a head-on view of the Tesla Roadster floating away from a glowing Earth as its nonchalant driver stares out into the void. How an image worth a thousand words can also leave you speechless is quite the paradox.

To refresh your memory, Musk chose to launch his midnight cherry Roadster into space because of the risks associated with launching the Falcon Heavy rocket for the first time. As we’ve seen time and again, Musk doesn’t end a joke until he’s pushed it too far, so he added a dummy astronaut wearing SpaceX’s spacesuit and a mini toy replica on the dashboard. He also printed “*made on Earth by humans*” on the car’s circuit board.

“Test flights of new rockets usually contain mass simulators in the form of concrete or steel blocks. That seemed extremely boring,” SpaceX founder Elon Musk wrote on Instagram last year. “Of course, anything boring is terrible, especially companies, so we decided to send something unusual, something that made us feel.”

The eccentric CEO said he was looking for the silliest thing he could imagine to put inside the world’s largest rocket in case it blew up at launch. Better to lose an EV (even if they are in short supply) than an expensive satellite. But Falcon Heavy’s flight was a resounding success. Off shot the bundle of Falcon 9 rockets into space without a hitch, blasting the first-gen Roadster into the abyss toward its eventual finish line: Mars. More accuracy, in a loop around the sun toward Mars’ orbit.

According to Jonathan McDowell, an astrophysicist at Harvard, the car will come closest to Mars at 4.3 million miles away in October of 2020. The closest it will get to Earth anytime soon will be in 2021 when it’s a measly 28 million miles away. Suffice it to say, Starman isn’t coming back anytime soon. At least, not until aliens return it to its rightful owners.